Two-time champion Sam Querrey won his opening match in the Farmers Classic, beating Igor Sijsling of the Netherlands 6-2, 6-2 on Wednesday at the Los Angeles Tennis Center. 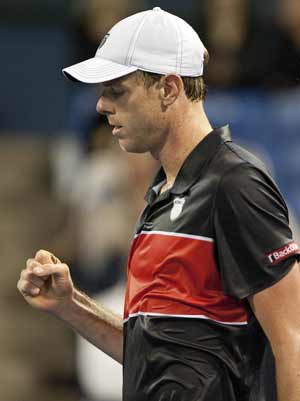 Two-time champion Sam Querrey won his opening match in the Farmers Classic, beating Igor Sijsling of the Netherlands 6-2, 6-2 on Wednesday at the Los Angeles Tennis Center.

Querrey, the 2009 and 2010 tournament winner who missed the event last year after undergoing surgery for a right shoulder injury, had nine aces and didn't face a break point in the 53-minute match.

"I feel like it's my tournament to win (again)," Querrey said. "I played great. I served really well, a lot of energy, and I hit my forehand great. There were a couple of little thing I could nitpick here and there but overall it was really good."

In the quarterfinals on Friday, the American will face fifth-seeded Xavier Malisse of Belgium or Matthew Ebden of Austria.

The American lost only nine points on serve and had 10 aces. He dominated the 64-minute match with that serve, winning 85 percent of his first-serve points (22-26) and 69 percent on his second serve (11-16).

"I just tried to get as many balls in (play) as I could," said Ram, who beat former junior doubles partner Brian Baker in the first round. "I also served well. It's important to win consecutive matches. That's what the top guys do. This was an important step for me. I'm trying to compete hard and not make too many errors. I don't want to beat myself out there."

Ram set up a match against third-seeded Leonardo Mayer of Argentina. Mayer had a 6-0, 4-0 lead when Italy's Flavio Cipolla retired because of a neck injury.

Ram won the singles and doubles titles in Newport, R.I., in 2009, beating Querrey in the singles final, and made the semifinals there this year.