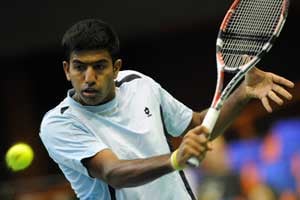 Indian challenge ended at the ATP Paris Masters when Rohan Bopanna and his French partner Edourad Roger-Vasselin lost their quarter-final against Ivan Dodig and Marcelo Melo.

There was no break in the opening set as Bopanna and his partner saved all five chances while their rivals saved the only one they faced.

In the second set, the Indo-French combine broke its rival pair twice after initially suffering a break even as they stretched the match to a super tie-breaker.

Losing points on crucial juncture cost Bopanna and Roger-Vasellin the match in the Super tie-breaker.

Leander Paes and his Canadian partner Daniel Nestor have already exited from the tournament after a second-round defeat.