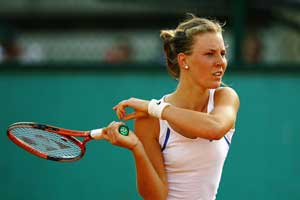 Rogowska needed slightly over two hours to oust the seventh-seeded Dokic at the Bukit Kiara Equestrian and Country Resort.

Her quarterfinal opponent will be Eleni Daniilidou of Greece, who cruised past fourth-seeded Australian Jarmila Gajdosova 6-4, 6-0.

Third-seeded Peng Shuai of China came from a set down to eliminate the Czech Republic's Kristyna Pliskova 2-6, 6-1, 6-4. She will play fifth-seeded Croat Petra Martic in the quarters.

Comments
Topics mentioned in this article
Tennis Jelena Dokic Badminton Olivia Rogowska
Get the latest Cricket news, check out the India cricket schedule, Cricket live score . Like us on Facebook or follow us on Twitter for more sports updates. You can also download the NDTV Cricket app for Android or iOS.