Roger Federer, after showing signs of fatigue in the second, took a quick break before the third, and then went on a roll to set up three match points in the ninth game. 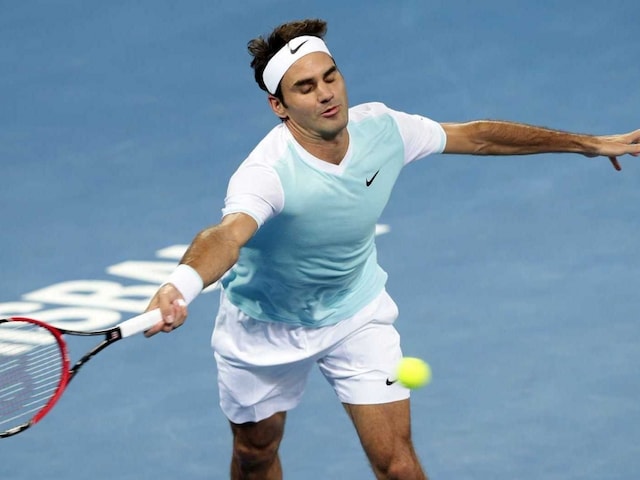 Roger Federer in action during the Brisbane Open.© AP
Brisbane:

Roger Federer overcame a lingering sickness to hold off Grigor Dimitrov 6-4, 6-7 (4), 6-4 on Friday and take his title defense into the semifinals at the Brisbane International.

Federer delayed his opening match at the Australian Open warm-up until the fifth day because of a flu-like illness and was playing Dimitrov in the quarterfinals on less than 24 hours rest.

His serve in the first set was almost flawless, dropping just two points, and he appeared to be on course with break-point chances for another straight-set victory over the young Bulgarian - sometimes likened to him because of their similar styles - before Dimitrov rallied.

After wasting a chance to serve out the second set in a nervous 10th game, Dimitrov dominated the tiebreaker and forced a decider.

Federer, after showing signs of fatigue in the second, took a quick break before the third, and then went on a roll to set up three match points in the ninth game. Again Dimitrov rallied, winning five consecutive points and forcing Federer to serve it out - which the 17-time major winner duly did.

"I'm not going to tell you too much, but it was tough in a way," Federer said of his illness, knowing the Australian Open starts Jan. 18. "Body is not quite ready, so it's good to get through it without any issues."

By holding off Dimitrov, who is 10 years his junior, Federer set up a meeting with 22-year-old Dominic Thiem, the youngest player in the top 20.

"It's for every young player an amazing experience to play with the probably greatest of all time," Thiem said. "You can learn so many things from him."

The other semifinal match will feature 2015 finalist Milos Raonic against Bernard Tomic.

Tomic ended 2014 U.S. Open finalist Kei Nishikori's streak of three straight semifinal appearances at the Brisbane International with a 6-3, 1-6, 6-3 win, his first over a top 10 player on home soil.

In Auckland, New Zealand, Julia Goerges reached her sixth WTA final and her first in four years when she beat qualifier Tamira Paszek 6-4, 6-2 in the ASB Classic semifinals.

Sloane Stephens was leading 5-2 in the first set of the other semifinal match against third-seeded Caroline Wozniacki when rain halted play, forcing it to be postponed to Saturday.

At the Hopman Cup in Perth, Andy Murray and Heather Watson each had 6-3, 6-4 singles wins over German opponents Alexander Zverev and Sabine Lisicki, and combined to win the mixed doubles by the same margin to secure a 3-0 win that kept Britain in contention for Saturday's final.

The Australia Green team can seal a spot in the final against Ukraine with a win over France late Friday. Nick Kyrgios gave the home team a 1-0 lead when he beat Kenny De Schepper 6-4, 6-4 ahead of Daria Gavrilova's match with France's Caroline Garcia.

"It's an event that's been held for a long, long time - before I was even born," the 20-year-old Kyrgios said. "It's pretty special. Especially me and Dasha - we grew up together in juniors. Hopefully we can bring it home."

Comments
Topics mentioned in this article
Bernard Tomic Kei Nishikori Milos Raonic Lucas Pouille Tennis Roger Federer
Get the latest Cricket news, check out the India cricket schedule, Cricket live score . Like us on Facebook or follow us on Twitter for more sports updates. You can also download the NDTV Cricket app for Android or iOS.