Roger Federer will battle 25-year-old Dominic Thiem, who is seeking his first title in one of the ATP's prestigious Masters 1000 events. 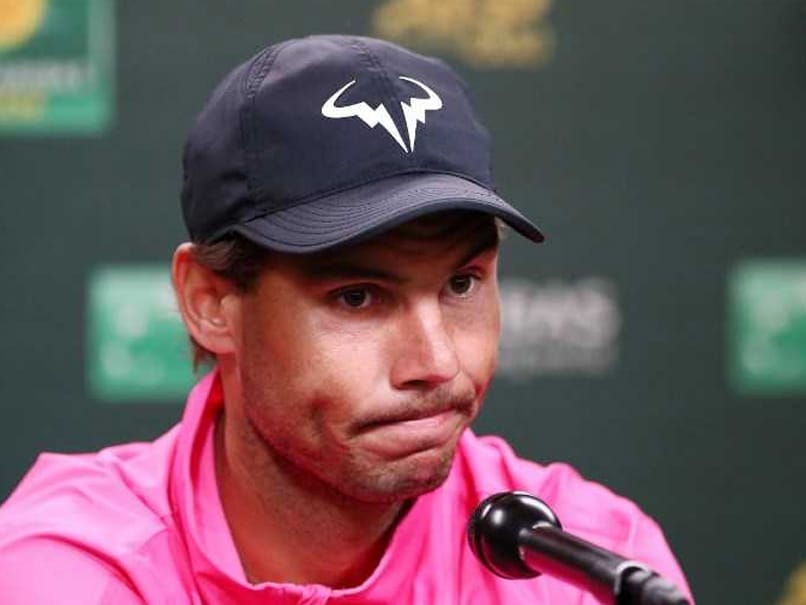 Rafael Nadal couldn't take the court for the semi-final against Roger Federer.© AFP

The 39th match between Roger Federer and Rafael Nadalfailed to materialize on Saturday as the world No. 2 Spaniard hobbled out of Indian Wells to send Federer into a title clash with Dominic Thiem. Nadal, whose longstanding right knee trouble flared up in his quarter-final victory over Karen Khachanov, couldn't take the court for the blockbuster semi-final with Swiss great Federer. "I wanted to try my best to be competitive today," a dejected Nadal said. "I warmed up today in the morning, and I felt that my knee was not enough good to compete at the level that I need to compete, to play semi-finals match of this event."

Federer, seeded fourth as he pursues a record sixth title in the California desert, will battle 25-year-old Austrian Thiem, who is seeking his first title in one of the ATP's prestigious Masters 1000 events.

Thiem, who advanced to the semis on a walkover when Gael Monfils withdrew with an Achilles tendon inflammation, was locked-in from the start, firing 10 winners without an unforced error in the opening set.

He couldn't convert his only break point against Raonic in the second, and Raonic managed to seize the tiebreaker aided by a favorable netcord bounce for a 5-3 lead.

Thiemgained the first break of the match for a 3-2 lead in the third and after saving the only break point he faced all day as he served for the match wrapped it up with a sparkling backhand volley.

"It was an amazing day," said Thiem, who will be playing in his third Masters 1,000 final. "His serve is just unreal so even though I played amazing it was so close the first two sets."

The Austrian said it would "mean the world" to break through for a Masters crown, but noted it would be a tall order against 20-time Grand Slam winner Federer -- who is coming off a remarkable 100th career title in Dubai last month.

"It's not going to be easy," said Thiem, who has split four prior meetings with Federer 2-2.

Federer was looking forward to the match and the chance to break out of a tie with Novak Djokovic for most Indian Wells titles, but was sorry to miss a meeting with Nadal.

Their rivalry stretches back 15 years, and Federer couldn't help wondering how many more chances they might have.

"We've had so many epic battles," Federer, 38, said. "I know that every one that we have now could be our last. So was this our chance at a last one -- I hope not and I believe at the level he's playing and the level I'm still going there's definitely going to be more."

The injury was devastating news for Nadal, whose run to the Australian Open final in January marked a return to competition for the first time since similar knee trouble forced him out of his US Open semi-final against Juan Martin del Potro in September.

He had ankle surgery in November, and only returned to training in December.

"For me it's not about only today. It's about what it means for me to have to pull out in a tournament that I love so much like this one, and in the semi-finals after playing well during the whole tournament," Nadal said. "You can imagine that I can't be happy."

Nadal confirmed he would also skip the upcoming Miami Masters and aim to recover and prepare for the claycourt season, targeting a return at Monte Carlo April 14-21.

Comments
Topics mentioned in this article
Roger Federer Rafael Nadal Dominic Thiem Tennis
Get the latest updates on IND vs NZ 2021, check out the Schedule and Live Score . Like us on Facebook or follow us on Twitter for more sports updates. You can also download the NDTV Cricket app for Android or iOS.