Roger Federer braved dust storm conditions to blow past Argentine Carlos Berlocq 6-3, 6-4 and open his week with a second-round victory at the Rome Masters on Wednesday. 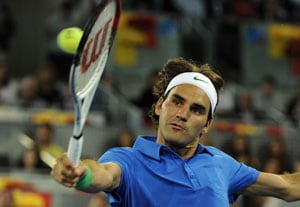 Roger Federer braved dust storm conditions to blow past Argentine Carlos Berlocq 6-3, 6-4 and open his week with a second-round victory at the Rome Masters on Wednesday.

The world number two with four titles this season - including two of the first three Masters 1000 honours of 2012 - came good on his hope of playing in Rome the week after winning in difficult conditions on and off court on the controversial slick blue clay of Madrid.

Federer is on the hunt for his first Rome title after losing the 2003 and 2006 finals. His victory left Berloq 0-8 against top 20 opponents as the Swiss charged out by winning the first dozen points of the contest.

Federer, 30, winner of titles in seven of his last 10 events dating to last November, left it late to actually decide on playing Rome, hoping that his body would give him indications of how he was holding up after Madrid.

He evidently got the right answer with his victory, bolstered by 16 winners in the first set and success on 12 of the last 15 points of the afternoon.

The Rome pressure now shifts to five-time champion Rafael Nadal to post a victory in his opening match.

The Spaniard has been mentally fragile after his troubles last week in Madrid, complaining about the blue clay and losing badly in the third round to Fernando Verdasco from a 5-3 lead in the final set.

The king of clay insists that all is fine in the kingdom now that he's left behind his Madrid bad memories. But his test will come in Italy as he faces German Florian Mayer, who beat him in their last meeting in Shanghai in 2011.

In women's play, China's Li Na moved on to the fourth round even as third seed Agnieszka Radwanska lost to only her third different opponent of the season.

The winner attacked and went for her shots on a windy day on the clay at the Foro Italico, producing 44 winners and 38 unforced errors. She broke the seed eight times from 20 chances.

Of Radwanska's eight defeats in 2012, six have come from world number one Victoria Azarenka, with their most recent meeting the Madrid semi-finals last weekend.