Some of Robert Kendrick's fellow ATP players are rallying behind the 31-year-old American in the wake of a one-year doping ban handed down last week by the International Tennis Federation. 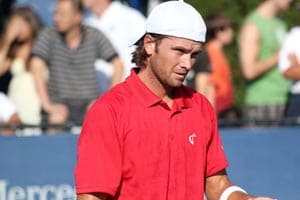 Some of Robert Kendrick's fellow ATP players are rallying behind the 31-year-old American in the wake of a one-year doping ban handed down last week by the International Tennis Federation.

But compatriot Wayne Odesnik, set to play his first ATP match on Wednesday after a seven-month ban following an admission he carried human growth hormone (HGH) into Australia, is getting no such sympathy.

Kendrick tested positive for the banned stimulant methylhexaneamine at the French Open in May. He claimed to have ingested the substance when he took a diet pill, Zija, to combat jetlag.

While accepting his story, the ITF said that players are responsible for any substance in their body and imposed a ban until next May, although an appeal to the Court of Arbitration for Sport could see that timeframe reduced.

"I think it's absolutely ridiculous he has gotten a year ban," American Ryan Sweeting said after a first-round ATP Washington Classic victory Tuesday. "I've been in touch with him. We've been speaking every day.

"For a 31-year-old to take one diet pill and receive a year ban, I just don't understand the logic behind it. All the players wonder what is going on."

While admitting that players do bear responsibility for what they ingest, Sweeting said that they wonder why some have received more lenient punishments for what could be considered worse violations.

"The punishment he received compared to punishments other players have received is absolutely absurd," Sweeting said.

Odesnik, whose two-year ban last year was reduced to seven months for participating in an ITF programme, faces Czech Radek Stepanek on Wednesday in a second-round affair.

"He got let off the hook a little bit while Robert Kendrick got a really, really raw deal," said American John Isner.

"I can say with 1,000 percent certainty (Kendrick) was not trying to enhance his performance. He made a mistake and he's paying a pretty steep price, too steep in my opinion."

"To put him out for a year, for all intents and purposes ends his career, is pretty harsh," he said. "To go out this way I don't think is fair, especially when we've got a guy in this tournament (Odesnik) who I think has done a lot worse."

As for Odesnik, Blake said: "I wouldn't say he's at our dinner table too often. I don't agree with what he did."

There is a "Free Kendo" Facebook page and Bosnian Amer Delic posted his support for Kendrick on the Twitter microblogging service.

"Common sense should prevail," Delic said. "My friend and colleague has been treated really really unfairly."

Sweeting noted that Kendrick, ranked 106th in the world, is dogged by injuries, which most performance-enhancing drugs help players avoid so they can work out for longer and build larger muscles.

"He's injured nearly every week. He is clearly not the most physical tennis player," Sweeting said.

"It's sad this had to happen."

Comments
Topics mentioned in this article
Robert Kendrick John Isner Wayne Odesnik Ryan Sweeting Tennis
Get the latest updates on IPL 2020, check out the IPL Schedule for 2020 and Indian Premier League (IPL) Cricket live score . Like us on Facebook or follow us on Twitter for more sports updates. You can also download the NDTV Cricket app for Android or iOS.