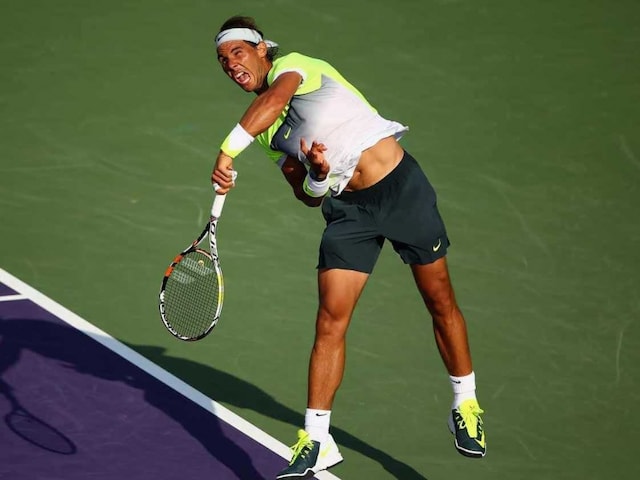 Rafael Nadal of Spain serves against Nicolas Almagro of Spain in their second round match during the Miami Open.© AFP
Miami:

Second-seeded Rafael Nadal launched his bid for a first Miami Masters title on Friday with a 6-4, 6-2 victory over fellow Spaniard Nicolas Almagro.

Nadal, who has four runner-up finishes in 10 prior appearances on the hardcourts of Miami, showed no signs of the training mishap which left him with a sore ankle and threatened to compromise his start.

"I think I did the things well when I had to do. I played with no mistakes in the important points," said Nadal. "The wind was really high, it was very difficult to find a positive feeling on court.

"I played a solid match. I played well, I had a good movement. I had some good winners, Almagro was not an easy opponent."

Nadal said that his ankle is not fully healed, but is tolerable.

Although it hurt when he injured it on Monday, "after two days I improved 50 percent and it stays the same. It's not limiting my movements."

Nadal took 52 minutes to win the opening set. The first four games took 23 minutes, but his early break of Almagro proved enough to take the set.

Nadal quickened his pace in the second, breaking Almagro twice and securing the win on his first match point to book a third-round berth.

He was done and dusted before the arrival of heavy rain that washed out the night session, which was to feature world number one Serena Williams launching her bid for an eighth Miami title with a second-round match against Monica Niculescu.

It's the second tournament in a row that Williams will find herself opening her campaign against the Romanian, having worked hard to beat her 7-5, 7-5 in the second round at Indian Wells, California.

Two-time champion Andy Murray also reached the third round, backing up his recent Davis Cup win over Donald Young with a 6-4, 6-2 win over the American.

The Scot, who won titles at the town he uses as a training base in 2009 and 2013, mustered just 14 winners and hit 21 unforced errors, but it was enough compared to the 32 unforced errors from Young in the match played in draining heat and humidity.

The victory took less than 90 minutes and put Murray into a third-round meeting with Colombia's Santiago Giraldo, who beat Robin Haase of the Netherlands 6-2, 3-6, 6-0.

"The heat was OK and the wind obviously cooled you down a little bit at the end changes," said the former Wimbledon and US Open champion. "It was just very tough weather to play good tennis in. So I just tried to play smart, and it worked."

Australian Bernard Tomic shook off effects of last week's wisdom tooth trouble and back pain at Indian Wells -- which forced him to forfeit a match -- posting a 7-6 (8/6), 7-5 victory over American Austin Krajicek.

Women's third seed Simona Halep pulled herself together after dropping the second set to earn a 6-4, 2-6, 6-1 victory over Czech Nicole Vaidisova.

The Romanian, who won the biggest title of her career on Sunday when she lifted the WTA premier level trophy at Indian Wells, was stunned in the second set by the 25-year-old Vaidisova, who retired in 2010 but is now making a return to the WTA which began late last year.

Although Halep was broken while serving for a three-set win at 5-0 in the third, she promptly broke back to secure victory in 92 minutes with 17 winners and 27 unforced errors.

Comments
Topics mentioned in this article
Rafael Nadal Serena Williams Nicolas Almagro Tennis
Get the latest Cricket news, check out the India cricket schedule, Cricket live score . Like us on Facebook or follow us on Twitter for more sports updates. You can also download the NDTV Cricket app for Android or iOS.