Nadal's 4-6, 6-2, 6-3 victory over Peter Gojowczyk confirmed him as the overwhelming favourite to take the title and do something he has never done before, win a tournament in the opening week of the year. 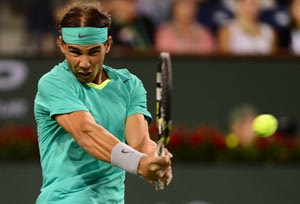 World number one Rafael Nadal will play Frenchman Gael Monfils in the Qatar Open final after beating surprise package Peter Gojowczyk in the semi-final on Friday.

Nadal's 4-6, 6-2, 6-3 victory confirmed him as the overwhelming favourite to take the title and do something he has never done before, win a tournament in the opening week of the year.

But Nadal may need to be specially wary of Monfils, whose two wins against the legendary Spaniard have both come here in Doha and who has arrived in the final with the mixed blessing of having dropped only 23 games in eight sets -- but with correspondingly far less match practice.

"I never win a title in the first week of the season, and tomorrow I have another opportunity," Nadal said.

"A lot of times I have tried here so it will mean a lot to me to succeed finally. Hopefully tomorrow (Saturday) I will play good and will play my best match here. I know I will try."

Nadal was rarely near his peak and started poorly, losing the first nine points of the match to the German qualifier.

He moved sluggishly and made 17 unforced errors with his famous forehand drive in the first set alone.

Gojowczyk, who had only previously played four matches on the ATP World Tour and admits to having sought Nadal's autograph at last year's US Open, was patient, methodical, and careful.

He was also capable of sudden dramatic changes of pace with which he could hit strident ground stoke winners.

"At the beginning my opponent was comfortable with every shot - even if he did play great," said Nadal.

"If my opponent is playing too comfortable it is because I am doing something bad. And then I have to analyse myself.

"The positive thing is I am arriving in the final without big preparation," he added, referring to the fact that new treatment on his troublesome knees has apparently restricted his off-season training to little more than a week.

He always seemed the likely winner thereafter but knows he needs to do better to stand a chance of winning the final.

"I need to play much better to have a chance tomorrow," he said. "If I don't improve my level of tennis, my level of rhythm, and play more inside (the baseline) my chances of winning will not be big."

Monfils hopes to prove that opinion correct. The Guadeloupe-born former world number seven appears more focussed and motivated than for a long time, and has apparently recovered from a wrist problem, the last in a long line of depressing injuries.

His 6-3, 6-2 win over Florian Mayer, the conqueror of Wimbledon champion Andy Murray, was however assisted by the German's very evident tiredness after three hard three-set matches in three days.

By contrast Monfils was lightning fast and rapier sharp, striking 30 winners and nine aces in a one-sided semi-final lasting less than an hour.

He also sounded more buoyant than for some time. Playing against Nadal though will be a different proposition.

"But I like it here," Monfils said optimistically. "I like the conditions, I like the balls and the court. The court is fast but I am still able to run and cover it, and I like playing at night time.

"There are a lot of French people here and it is a little bit like playing in France. I hope to do well."