Defeat continued Rafael Nadal's wretched run at Wimbledon since he lost the 2011 final to Novak Djokovic. 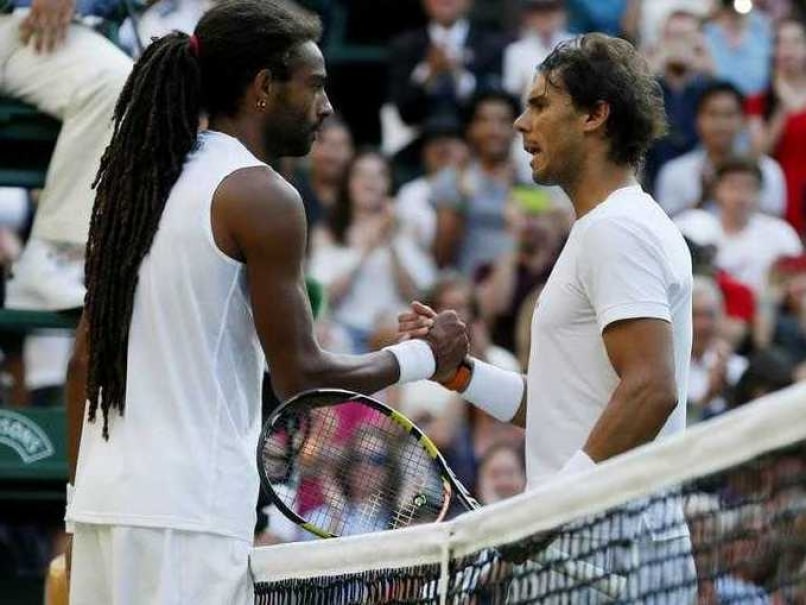 The untroubled advance of the heavy hitters at Wimbledon was spectacularly halted on Thursday when twice champion Rafa Nadal was bundled out by German qualifier Dustin Brown who played the match of his life.(Nadal Crashes Out)

Roger Federer, Andy Murray and Petra Kvitova all cruised into the third round with straight-sets victories as the tournament meandered serenely through its fourth balmy day.(Brown Reveals Nadal Win Was Centre Court Debut)

But the calm was shattered by the final match on Centre Court when Brown, a man until now best known for his unconventional approach and dread-locks, brought back memories of the golden summer Wimbledon evenings of wooden rackets as he combined relentless power with brave and ambitious creativity.(Nadal Crashes to New Wimbledon Low)

Brown came out swinging and even when Nadal dug deep to level the match at one set all he did not hold back, going for his shots and harrying his illustrious opponent at every opportunity.(Nadal Vows to Carry on)

Along with the power there was finesse which had the Centre Court crowd roaring their approval and Brown rattled through the final set to secure a fully deserved victory.(Brown Has Nadal's Number)

"You have to play your A game against him," said Brown, who also beat Nadal in their only previous meeting in Halle last year.(Nadal Vows to Carry on)

"I'm fortunate I played him twice on grass, which is my favourite surface -- I wouldn't want to play him anywhere else. My game makes him not play his game. He doesn't get in a rhythm."(Brown Stays True to his Roots)

Defeat continued Nadal's wretched run at Wimbledon since he lost the 2011 final to Novak Djokovic.(Rafael Nadal - Decline and Fall)

In successive years he has lost to players ranked 100, 135, 144 and now 102 without getting past the fourth round -- a stunning decline for the 14-times grand slam winner who triumphed atWimbledon in 2008 and 2010 and has been runner-up three times.

"My motivation is to be back to that level but I don't know if I can," 10th seed Nadal said.

"But I've played on the last day here five days and had the trophy back home twice, so it's not bad."

The day's explosive finale was in marked contrast to the early matches which went exactly to form.

Murray led the way by polishing off Dutchman Robin Haase 6-1 6-1 6-4 in 87 minutes with barely a misplaced shot.

"In grand slams you have to try to conserve energy when you can really because the two weeks can be quite draining physically and mentally," Murray told reporters.

Federer was equally untroubled in a 6-4 6-2 6-2 mauling of American Sam Querrey.

Seeking a record eighth Wimbledon singles title, the Swiss was on cruise control from the off.

On one rare occasion when he did find himself out of position he managed to manufacture a lob from between his legs that climbed over his 6ft 6ins (1.98m) opponent.

"So far so good," Federer said. "Sometimes the feeling is good out there and today was definitely a good day.

"I guess there's also a little bit of relief that I'm also playing well at Wimbledon."

Possibly even more impressive was Kvitova, whose 6-2 6-0 demolition of Kurumi Nara meant the defending champion has dropped only three games in two matches.

After four days of action the top four men's seeds have yet to drop a set between them, with only two going as far as a tiebreak.

It is a similar story on the women's side. Although third seed Simona Halep went out in the first round, the remaining top four players have also not dropped a set.

There are still threats floating in the draw, however, and Germany's 18th seed Sabine Lisicki, runner-up two years ago and with a great Wimbledon record, is one of them.

Lisicki lost the first set American Christina McHale and was broken in the opening game of the second but regrouped impressively and by the end was pounding down a succession of powerful winners en route to a 2-6 7-5 6-1 victory.

However, there will be little room for her accomplishments in Germany's sports pages on Friday as the country's newest, and most unlikely, tennis hero Brown will be hogging all the headlines.

Comments
Topics mentioned in this article
Rafael Nadal Dustin Brown Tennis
Get the latest updates on T20 World Cup, check out the T20 World Cup Schedule and Live Score . Like us on Facebook or follow us on Twitter for more sports updates. You can also download the NDTV Cricket app for Android or iOS.