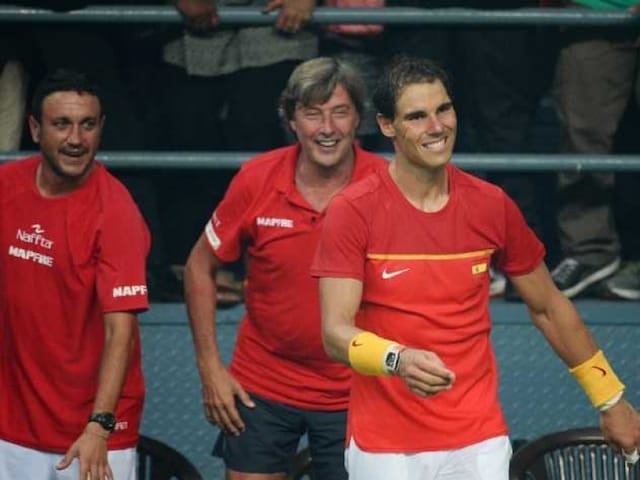 Nadal and Lopez, who won the doubles gold at the recent Rio Olympics, helped Spain take an unassailable 3-0 lead to enter the elite group after a two-year gap.

World number four Nadal shrugged off early rustiness as the Spanish pair served past the Indian duo of Paes and Myneni 4-6, 7-6, 6-4, 6-4 in three hours and 23 minutes.

Nadal missed the opening singles match on Friday following a reported stomach ache as Feliciano Lopez and David Ferrer put Spain in firm control of the tie with their respective wins.

But the 14-time Grand Slam winner made his presence felt in the doubles encounter at New Delhi's RK Khanna Tennis Stadium.

Nadal's early struggle with his game saw the visitors lose the first set after being broken twice by an inspired home pair, who had the raucous crowd behind them.

The Spanish duo were also run in close in the second set but a crucial break in the 10th game proved to be a turning point for the visitors.

The tie-break win was enough to get the best out of Nadal, who showed flashes of his brilliance to entertain the capacity crowd.

India's Paes and Myneni fought valiantly against their opponents, never allowing the Spanish pair to breathe easy in the marathon battle.

The 43-year-old Paes with his neat serve and volley showed why he is known to be a dangerous doubles player.

But the left-handed Nadal, who was guilty of committing a lot of unforced errors in the first two sets, attacked the net with great success as Spain dominated the final two.

Marc Lopez, who is placed 15th in the doubles ranking, complimented Nadal's attacking style with his good baseline play.

Spain, who bowed out of the World Group after a first-round loss against Germany in 2014, now head into the elite round of matches.

The 'dead' reverse singles will be played on Sunday.

Comments
Topics mentioned in this article
Rafael Nadal Marc Lopez Leander Paes Saketh Myneni Tennis
Get the latest Cricket news, check out the India cricket schedule, Cricket live score . Like us on Facebook or follow us on Twitter for more sports updates. You can also download the NDTV Cricket app for Android or iOS.