Rafael Nadal slumped to a second-round exit at the hands of Germany's Dustin Brown in Wimbledon on Thursday. 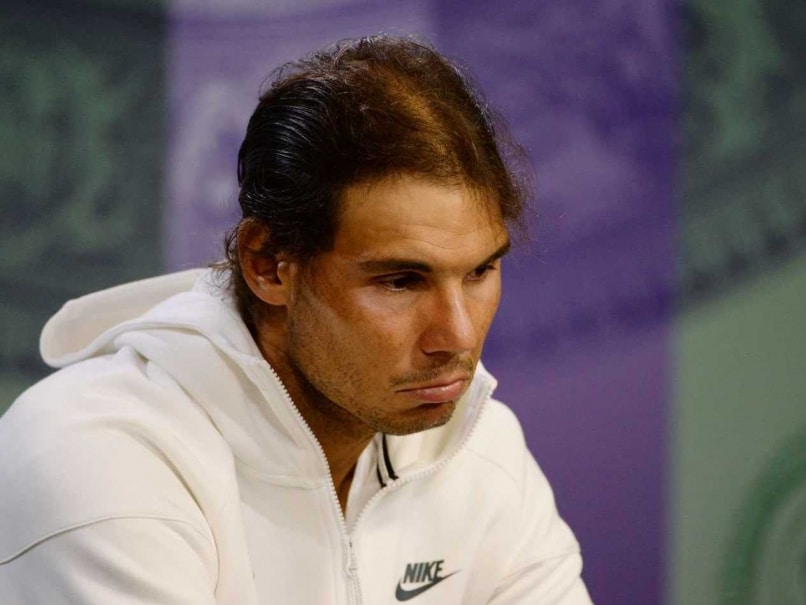 Rafael Nadal reacts during a press conference after his second-round exit from Wimbledon.© AFP

If you've followed Rafael Nadal's exploits (rather the lack of them) at Wimbledon in the last few years, his loss to unseeded Dustin Brown in round-2 may not surprise you. (Nadal Crashes Out)

There is an eerie pattern to it. Only round-3 seems to be missing, as is a 3rd Wimbledon title. (Brown Reveals Nadal Win Was Centre Court Debut)

For a man who never set foot on centre court before, Dustin Brown's win over a fourteen-time grand slam champion is worthy of high praise. But, I wouldn't go as far as describing it as the rise of a new force in tennis; at 30 years of age, the German born, Jamaican resident of English parentage, isn't exactly a spring chicken. (Nadal Crashes to New Wimbledon Low)

Making predictions in sports can be tricky, so I'll tread with trepidation, but I don't foresee Brown winning his next round match; an analysis based not so much on his opponent Victor Troicki's prowess, but more on the German's shortcomings. True, on Thursday, the Bob Marley lookalike was serving like a 'Lion', volleying as strong as 'Iron', and the equanimity he displayed on court felt as if he were in 'Zion'; but how does one overlook the fact that Nadal too hasn't quite been 'jamming' on the grass of SW-19 for the last few years.

Maybe that is what explains why all three players that beat him at Wimbledon, in the years before Dustin Brown, went onto lose their very next encounter. Didn't Brown too beat Nadal on grass exactly a year ago, at Halle, forcing sports writers and commentators to wax eloquence about the German journeyman, only for him to fade into oblivion a few days later, eventually re-surfacing on Thursday at Wimbledon. (Nadal Vows to Carry on)

To cut the long story short, Thursday night at centre court was more a case of Nadal losing than Brown winning.

His constant brush with injuries can't be discounted. But the Spanish Matador has almost always found a way back; Winning two Grand slams in 2013 after a nine month injury lay-off serves as the perfect example. Yet this time, the prospect that one of the greatest players ever to have walked onto the tennis court may never win another grand slam seems real. Even his staunchest supporters would agree that their superhero's powers are on the wane.

From what one saw of Nadal at Wimbledon this year it was pretty evident that he had made a conscious effort to change the way he approached a match: Emphasis was on hitting winners, taking risks, rather than engaging in long rallies and waiting for his opponent to make a mistake; a great, and probably the best way to play on grass, but probably not the best way for Nadal to win on grass.

"I have never seen him miss so many forehands from the centre of the court. Never ever", is how Vijay Amritraj described Nadal's loss.

The change in strategy meant Nadal veered away from his natural habitat, looking totally out of depth on the court.

One mustn't forget, Rafael Nadal was never a tiger that killed his prey in a matter of seconds; Nadal was always a python who took a substantial amount of time to strangle his prey, eventually suffocating him to death. Nadal was also never a Brian Lara, who would tear apart the bowling with a technique that was high on both aesthetics and aggression; he was instead Steve Waugh, who won cricket matches on sheer grit and determination.

Simply put, Rafael Nadal is, always was, a hustler; never a gambler.

Perhaps, the fourteen-time grand slam champion needs to go back to what he's best at rather than trying to be the best at something he isn't familiar with; that may just be his best chance to get back to winning ways.

But is there a realistic chance of Rafael Nadal getting back to his Grand Slam winning best?

I wouldn't bet against it. Though the best time to judge him would be the US Open; it would have given him enough time to recuperate from his injury and would be played on a surface of his liking.

Is there a case for him to look at someone else other than his childhood coach Uncle Tony?

Wouldn't hurt him. May also be his best option to hedge his bets.

Comments
Topics mentioned in this article
Rafael Nadal Dustin Brown Tennis
Get the latest updates on IPL 2021, check out the IPL 2021 Schedule and Indian Premier League Live Score . Like us on Facebook or follow us on Twitter for more sports updates. You can also download the NDTV Cricket app for Android or iOS.