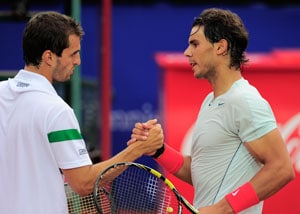 Rafael Nadal continued to re-establish his impeccable clay credentials as the seven-time champion scored two victories Friday to reach the semi-finals of the Barcelona Open.

Due to rain on Thursday which wiped out much of the programme, the second seed did double duty in both the third round and quarter-finals, defeating Frenchman Benoit Paire 7-6 (7/2), 6-2 in the morning and following up with a more substantial victory over Spanish compatriot Albert Ramos 6-3, 6-0 in late afternoon.

Ramos had booked his place against Nadal by putting out Japanese sixth seed Kei Nishikori 6-4, 7-6 (7/4) in a delayed third-round match.

Nadal has won seven of the last eight editions at the Real Club de Tenis.

The Spaniard, sidelined for seven months until February with a knee injury, appeared to be well on the road to recovery after his loss in the Monte Carlo final last week to Novak Djokovic.The 26-year-old Nadal improved to a 38-1 career record in Barcelona with his only loss against current Davis Cup coach Alex Corretja in the 2003 second round.

In his win against Paire, Nadal shook off a slow start. As the morning match wore on, he found his familiar claycourt groove, lifting the first set in a tie-breaker and dominating in the second to take his third-round win.

"It wasn't a brilliant match but winning was the most important thing," said Nadal. "It's a long day today, so straight sets is not a bad way to start."

Nadal could not have been happier with his day's work: "I played my best match of the tournament so far," he said after dispatching Ramos in 65 minutes. "I got through this very complicated day just fine.

"I was much better in the second match and was helped by a lot of mistakes from Albert."

Kohlschreiber then struck it lucky as intended quarter-final opponent Thomaz Bellucci withdrew injured, sending his opponent into the first of the semi-final places.

He will aim for the final against Spanish fourth seed Nicolas Almagro, who defeated Argentine Juan Monaco 6-3, 7-5.

"I'm excited to finally make the semis here," said Almagro. "But it will be tough against Kohlschreiber, he's such a good returner."