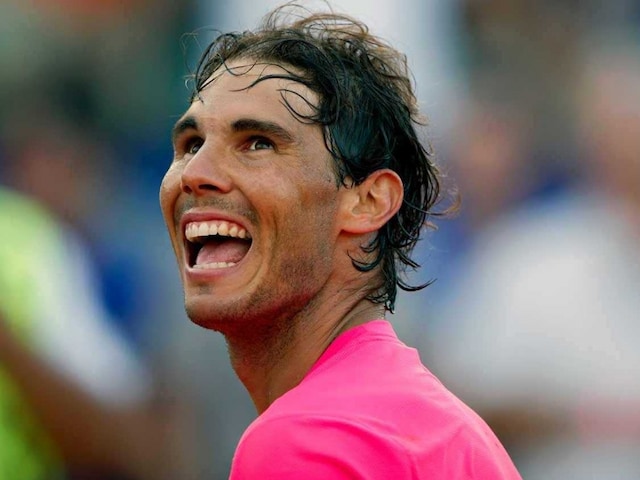 Reigning French Open champ Rafael Nadal defeated Carlos Berlocq in straight sets to reach the final of the Argentina Open where he will try to secure a slice of clay-court history.

The 28-year-old left-handed Spaniard rallied in the opening-set tie-breaker from a 6-1 deficit to win, then clinched Saturday's semi-final match when Berlocq hammered a forehand long on the first match point.

"I was serving short in the first set and he (Berlocq) was very aggressive," said Nadal, who won 7-6 (9/7), 6-2. "In the second I was more aggressive and more dynamic with my shots. The tranquility and confidence gave me more energy at the end. I'm happy with the victory."

Nadal next faces Argentina's Juan Monaco in Sunday's final where Nadal will be trying to equal Guillermo Vilas' all-time record of 46 titles on clay.

Monaco reached his 20th career ATP final and is competing in his third final on home soil at the Estadio Billoch Caride.

Nadal is playing in this event for the first time in 10 years, when he reached the quarter finals. He is 5-1 lifetime against Monaco.

The Mallorcan native is trying capture his first title since claiming a ninth French Open crown in June.

"It is very important to play my first final of the year here in Buenos Aires," Nadal said.

Berlocq threatened to steal the first set in a tie-break after surging to a 6-1 lead, but Nadal fought back, winning eight of the next nine points to grab the opener. After falling behind a break in the second set, Nadal rallied again, reeling off six consecutive games to claim the momentum for good.

Nadal breezed into semi-finals by defeating Facundo Arguello 6-4, 6-0 and Federico Delbonis 6-1, 6-1. He received a bye in the first round.

Nadal has dropped a combined seven games in his last three encounters with Monaco. Nadal cruised to a 6-1, 6-0 win in their most recent meeting last year at the Madrid Open.

The Nadal-Monaco matchup means the Argentina Open will be won by an Argentine or Spaniard for the 13th consecutive year. Since 2003, the champion has come from one of the two countries, including the past six by Spain.

Comments
Topics mentioned in this article
Rafael Nadal Carlos Berlocq Juan Monaco Tennis
Get the latest Cricket news, check out the India cricket schedule, Cricket live score . Like us on Facebook or follow us on Twitter for more sports updates. You can also download the NDTV Cricket app for Android or iOS.