Nadal, who is recovering from a knee injury, at times appeared a bit tentative but used powerful serves and brilliant drop shots to tame his opponent. 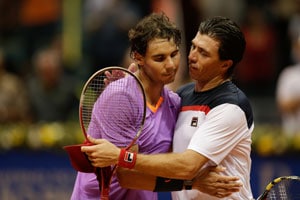 Rafael Nadal advanced to the semifinals of the Brazil Open late on Friday, with a difficult three-set win over Argentine Carlos Berlocq.

The 26-year-old Spaniard, ranked number five in the world, won his singles quarterfinal match 3-6, 6-4, 6-4 in two hours 24 minutes against the 30-year old Argentine, ranked 78th in the world.

Nadal will face off in Saturday's semifinal against another Argentine, Martin Alund, who earlier Friday defeated Filippo Volandri of Italy 7-5, 7-6.

But the Spaniard, who enjoyed the raucous support of the crowd at Sao Paulo's Ibirapuera gymnasium, later said he never thought of losing the contest.

"I was able to be solid with my serves and take advantage of the fact that he (Berlocq) did not return well," he said.

Nadal, who is recovering from a knee injury, at times appeared a bit tentative but used powerful serves and brilliant drop shots to tame his opponent.

"For me every victory is important. It is the moment to have the necessary humility to fight in every match as I did today," he said.

"It's the first match I win in three sets here. It helps me get better physically, It helps me regain my self-confidence," Nadal added.

is the top seed in this $455,775 tournament, his second comeback event after a seven-month absence.

Last week, he competed in the Vina del Mar Open in Chile, losing the singles and doubles finals Sunday.

Nadal has claimed seven of his 11 Grand Slam titles on the clay courts of Roland Garros. He won the Brazil Open in 2005, when it was held in Costa do Sauipe in eastern Bahia state.

Last year, the tournament was moved to Sao Paulo.

The Brazil Open is part of the Latin American clay court circuit, along with the Vina del Mar event and the Mexico Open, in Acapulco, where Nadal plans to play later this month.

Comments
Topics mentioned in this article
Tennis Rafael Nadal Carlos Berlocq
Get the latest Cricket news, check out the India cricket schedule, Cricket live score . Like us on Facebook or follow us on Twitter for more sports updates. You can also download the NDTV Cricket app for Android or iOS.