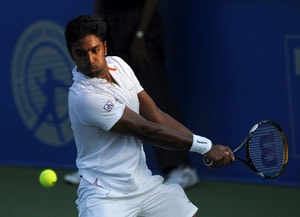 The 27-year-old Amritraj, son of Vijay Amritraj and playing his fourth tournament on his comeback trail, scored a 6-4, 6-2 win in just one hour and 10 minutes over the fourth seeded and 374th ranked Myneni at the Koregaon Park.

The match turned out to be error-prone for Myneni who looked uncomfortable with a right arm injury through out the match.

Myneni, known for his serves, fared poorly and was broken in the fifth game of the first set.

Amritraj, who has been playing maturely this week, served out the fisrt set in the 10th game and in the second set, Amritraj broke in the 3rd and the 5th games with Myneni playing some loose tennis to wrap up the match and his second title in four weeks.

"My mind is refreshed and I'm blessed that I can play everyday, I felt good and had a good day and hope that I can play some good tennis. Saketh was the scariest opponent this week but I'm thrilled with a win at Pune where I'm playing for the first time," said Amritraj.

Comments
Topics mentioned in this article
Ivo Karlovic Prakash Amritraj Rohan Bopanna Leander Paes ITF Tennis
Get the latest updates on IPL 2020, check out the IPL Schedule for 2020 and Indian Premier League (IPL) Cricket live score . Like us on Facebook or follow us on Twitter for more sports updates. You can also download the NDTV Cricket app for Android or iOS.