Bulgaria's Tsvetana Pironkova pulled off a surprise win against a sick Varvara Lepchenko of the US here in the Kremlin Cup on Tuesday. 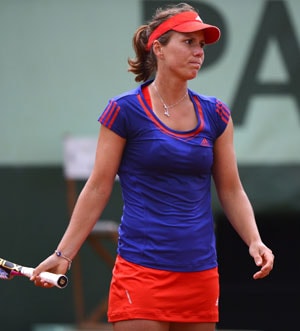 Bulgaria's Tsvetana Pironkova pulled off a surprise win against a sick Varvara Lepchenko of the US here in the Kremlin Cup on Tuesday.

Slow-starting Lepchenko was swept off the court in the first set but went a break up in the second before Pironkova reeled her in and won the match on the tiebreak for a 6-0, 7-6(3) win.

"I started really well. My serve was going really well, all my shots were just in the place where I wanted them to be," said Pironkova.

Lepchenko blamed illness for the early exit at her last tournament of the season.

"I wasn't feeling that great the whole week and the previous week. I tried the best I could but unfortunately it didn't show any results today. I was struggling with my sleep, with breathing and it showed," said Lepchenko.

Pironkova, ranked 23 places below Lepchenko at No.44, faces either reigning champion Dominika Cibulkova or Russia's Ekaterina Makarova in the second round.

Kravchuk, ranked 297 in the world, dominated the encounter, racking up 16 aces against Korolev's two to secure a 6-4, 6-3 win in a battle of two qualifiers.

The next opponent of the 27-year-old Russian will be eighth seed Tatsuma Ito of Japan.