Petra Kvitova off to winning start in Madrid

Czech Petra Kvitova kick-started her title defence at the Madrid Masters on Monday with a 6-2, 6-3 defeat of New Zealand's Marina Erakovic. 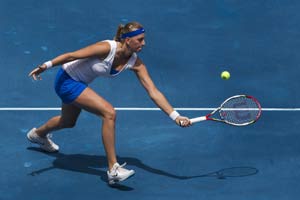 Czech Petra Kvitova kick-started her title defence at the Madrid Masters on Monday with a 6-2, 6-3 defeat of New Zealand's Marina Erakovic.

The third-seeded Wimbledon champion, who defeated Victoria Azarenka in straight sets to lift the 2011 trophy, went through into the second round in 67 minutes, firing five acres and producing 28 winners.

Erakovic, the number 39 who has lifted her game in recent months with a Memphis final and semi-final showing last week on clay in Budapest, was broken five times.

None of the women have yet voiced complaints about the new blue clay laid down at the Caja Magica, an issue which has some men led by Rafael Nadal up in arms and outraged at a change in tradition from the classic orange.

Comments
Topics mentioned in this article
Tennis Marina Erakovic Mahesh Bhupathi Mark Knowles Novak Djokovic Rafael Nadal Samantha Stosur Roger Federer Petra Kvitova
Get the latest updates on IPL 2020, check out the IPL Schedule for 2020 and Indian Premier League (IPL) Cricket live score . Like us on Facebook or follow us on Twitter for more sports updates. You can also download the NDTV Cricket app for Android or iOS.