Shahar Peer believes that she has once again shown that sporting contact across political fault lines can transcend the world's worst conflicts. 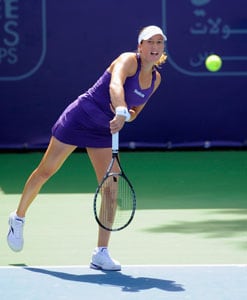 Shahar Peer believes that she has once again shown that sporting contact across political fault lines can transcend the world's worst conflicts.

The former Israeli soldier last year became the first woman from her country to compete in the United Arab Emirates, which does not have diplomatic relations with Israel.

Her campaign at the Dubai Duty Free Open ended in the quarterfinals Friday with her father Dovik Peer uttering impassioned words in praise of those who "have shown that sports can be above anything else".

His daughter tolerated the highest security which involved guards around her at all times, competing only on more easily protected outside courts, and living in an outhouse separate from other players.

It was a remarkable achievement by both player and the organizers that she should perform securely and superbly for a second successive year.

"We had the Women's Tennis Association doing whatever they could do to allow Shahar to play here," Dovik Peer said.

"The second body that did unbelievable work is the tournament itself. They decided to take this on and do it.

"And the third are the people on the ground, the persons that are doing all the work of hosting us, looking after Shahar.

"I think these three groups are unbelievable. And more than unbelievable, they have shown that sports can be above anything else. I would like to thank, in Shahar's, name all those three bodies."

Part of the motive for Dubai providing special hospitality to Peer is a need to show that any nation can be safely accepted in the city if it is to make a successful Olympic bid one day.

Last year it seemed something of a gamble to have Peer here, as it occurred a short time after the murder of two leading members of Hamas, allegedly by Israeli agents posing as tennis players, in a hotel just 300 metres away.

Some tension remained this year, but at a lower level. The nationality "Israel" even appeared in one local newspaper along side Peer's name, which is quite a rarity, and Peer no longer felt she was travelling into a potentially dangerous unknown.

"I really hope to come every year," she said after her 6-2, 6-4 loss to Caroline Wozniacki, who becomes world number one again on Monday.

"It just makes me play better and better. I really appreciate everything I get here."

Peer has forged many friendships with local Arab people, especially one woman who noticed that she was feeling a bit nervous when she arrived this time.

"This lady who is here with me, she told me on the first or second day, 'why you're not smiling?'" said Peer.

"The minute she told me this I'm like, 'whoa, something is wrong here, because she doesn't know me and she already says this.' So I got to work on myself.

"After I lost, she's like, 'it's okay -- Inshallah (God Willing), next week. It's not the end of world, it's only the beginning of the world.' It helped me being with her."

Peer did admit she would rather have a sense of relief that it is all over in two days time, when the tournament ends.

Despite this she has been inspired by her great diplomatic experience into an ambition to return here one day and be able to play for the first time on the centre court - quite safe and sound.

Comments
Topics mentioned in this article
Tennis Vera Zvonareva Daniela Hantuchova Anna Chakvetadze Caroline Wozniacki Shahar Peer Kateryna Bondarenko
Get the latest updates on India vs Australia Series, check out the India vs Australia Schedule for 2020-21 and Ind vs Aus live score . Like us on Facebook or follow us on Twitter for more sports updates. You can also download the NDTV Cricket app for Android or iOS.