The world number two currently has 13 and has been in sizzling form this season after long-term injury. He is also closing in on the top spot in the world rankings, currently held by Novak Djokovic. 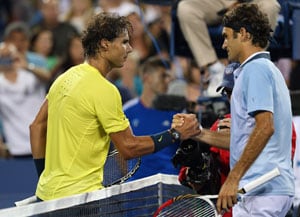 Rafael Nadal said on Tuesday he will look back on his career with pride even if he doesn't eclipse Roger Federer's record 17 Grand Slam titles.

The world number two currently has 13 and has been in sizzling form this season after long-term injury. He is also closing in on the top spot in the world rankings, currently held by Novak Djokovic.

Tennis legends Andre Agassi and Pete Sampras reportedly said the Spaniard could overtake Federer before the 27-year-old finishes his career.

"If that happens or that not happens, the only thing I am sure is when I am going to leave this tour, I am going to be very happy about what I did," Nadal told reporters in Beijing in response to questions about the comments from Agassi and Sampras.

Nadal believes he would need to sustain his form -- and crucially his fitness -- for the next four years if he is to better Federer's Grand Slam achievements.

"I tried everything in every practice, in every match. I gave everything. When you try your best every day, that's all that you can do. I think I did. So that's why I am going to be happy," Nadal said after he won his opening game at the China Open against Santiago Giraldo 6-2, 6-4.

The second seed and 2004 champion in Beijing will now face German Philipp Kohlschreiber in the second round.

Comments
Topics mentioned in this article
Novak Djokovic Bernard Tomic Andy Murray Rafael Nadal Stanislas Wawrinka Roger Federer David Ferrer Tennis
Get the latest updates on ICC T20 Worldcup 2022 and CWG 2022 check out the Schedule, Live Score and Medals Tally. Like us on Facebook or follow us on Twitter for more sports updates. You can also download the NDTV Cricket app for Android or iOS.