Serb has won only once at Flushing Meadows and wants more. The good news for Novak Djokovic is that, at 28 and with nine majors to his name, he is getting better. The bad news for everyone else is that the newly minted Wimbledon champion says he might play on for as long as the 33-year-old Roger Federer, whom he beat over four sets of a tense and thoroughly absorbing final on Sunday. (Serena, Djokovic Dance Wows Fans)

"I feel like I'm at the peak of my abilities and career, and I want to use that for as long as I can," he said on Monday . When asked if Federer's enduring career was an inspiration, the world No1 said: "How long I can go I really don't want to predict. Roger is 33 and he also doesn't think about how many years he can go.

"Two years ago he had the first season that was below his standard, people were saying to him to retire but next year it came down to one or two matches and he was fighting for No1 in the world. Now he's playing in the final of grand slams, fighting for trophies. He definitely deserves respect for everything he keeps on doing and achieves. Hopefully I will be able to be as healthy as him and keep going. I'm trying to take care of my body as much as I can and avoid the biggest enemy of any professional athlete which is injury but I think the decision will come down to how I feel mentally, how long I can motivate myself to keep going and keep pushing my own limits." (Djokovic Has History in Sight After Wimbledon Triumph)

Djokovic, whose fitness, flexibility and strength are the wonder of the tour, looked suitably refreshed after dancing the night away at the Champions' ball at the Guildhall in London, alongside the women's champion, Serena Williams, as well as his wife, Jelena, with whom he also was celebrating their first wedding anniversary. (Third Wimbledon Title Feels as Sweet as First: Djokovic)

In surroundings he has come to regard as his second home, Djokovic said he is looking forward to matching the standards of longevity as well as the domestic contentment of Federer, who travels the world with his wife, Mirka, and their two sets of twins. "Ever since I got married and became a father [to Stefan, last October], I haven't lost many matches and I [have] won many tournaments," Djokovic said at the celebration dinner. "I suggest that to every player: get married, have kids."

Since he married Jelena, he has won 58 matches and lost only three - the most painful of those the French Open final last month - and collected eight titles, a phenomenal return. Andy Murray's win-loss record since he married Kim Sears in April is 25-2 (and a walkover), with three titles. (There's More to Come, Warns Djokovic)

Now Djokovic, who was in the hunt for a calendar grand slam until Stan Wawrinka derailed him in Paris, anticipates hitting another peak on the second leg of the American hardcourt swing and the US Open in seven weeks' time. He said winning Wimbledon has considerably roused his spirits and refocused his ambitions.

He was also cheered to be reminded that, although he lost the final at Roland Garros, he has beaten Rafael Nadal there on his favoured clay, followed by Federer on the grass of Wimbledon, where the Swiss has won seven titles. 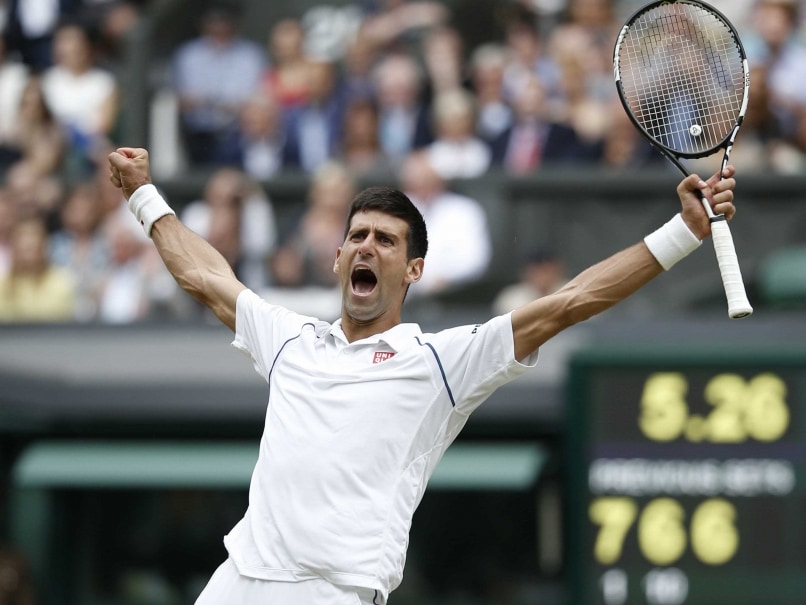 "That is a great achievement now that you mention it," he said. "I didn't think about it, but it feels pretty good. It's probably the ultimate challenge to win against those two guys on their preferred surfaces."

Yet there was lingering ennui after he failed to capitalise on putting Nadal out of the French Open in the quarter-finals.

"It wasn't easy to deal with another loss in the final but I lost to a better player. I had to congratulate him. I had to move on. The fact that I had Wimbledon around the corner helped me to rejuvenate - mentally, mostly, because physically I was feeling OK.

"I just mentally was very disappointed, down on myself, and I didn't know how long that feeling would stay with me, how long I would feel the traces of Roland Garros. Considering where I was - state of mind, I would say - three or four weeks ago, it's pretty amazing to be here with you today as the Wimbledon champion, because I've managed to overcome that huge challenge once again. It's very similar to last year."

That is gone. New York and beyond are his obsessions now.

"Right now I still have this flair inside of me and passion and love for the sport. I enjoy coming out on the court and doing the repetitive things which sometimes are not very pleasant but at the end of the day it pays off and it allows you to be in the position to fight for these trophies.

"I'm a big believer in preparation, in constructive, professional, well-thought work and strategy. I have a great team of people around me, they have their own area of expertise and are contributing to my success."

Djokovic rejected the view that the US Open is the one slam where he seems to fall short, even though his game is best suited to that surface.

"It's probably my best Grand Slam," he asserted. "Since I played my first US Open main draw [in 2005], in 2007 I played the first final, and ever since then I've been reaching at least the semi-finals. That says something my game and my results there.

"But, of course, I didn't manage to make that final step many times - only once, in 2011. I'm going there with that thought in my mind: I like the surface, I like the conditions, I like playing in Arthur Ashe, it's the biggest stadium in the sport. With all the achievements this year so far behind me, I think I'm in a very good position to go far."

Comments
Topics mentioned in this article
Novak Djokovic Andy Roddick Andy Murray Roger Federer Tennis
Get the latest updates on IPL 2021, IPL Points Table , IPL Schedule 2021 , live score . Like us on Facebook or follow us on Twitter for more sports updates. You can also download the NDTV Cricket app for Android or iOS.