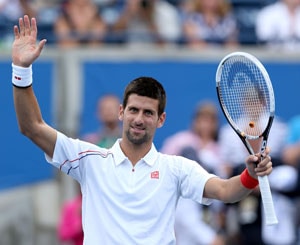 Despite his valiant efforts, Haas, 34, the oldest player in the tournament, lost the third set after tying with the 25-year-old Serbian powerhouse in the first two, Xinhua reported on Friday.

Despite the loss, Haas, whose career high ranking was No.2 more than a decade ago in May 2002, played impressively against current No.2 Djokovic with his smart, risk-taking style that delighted and thrilled the audience.

Time and again Haas sent Djokovic scrambling all over his half of the court chasing the ball, with his wicked backhand shots and uncanny ability to detect and seize every opportunity to send drop shots right off the net. He missed a few times, but succeeded more times.

But in the end, it was not enough to overcome Djokovic's dominance from the baseline. Even if he was fresh off the Olympics matches and with lingering jetlag, Djokovic again reminded the audience why he is among the world's best players as he hit the tennis ball to incredible angles.

Djokovic, who appeared tense on the court, was gracious about his worthy opponent after the match.

"Tommy is a great player," he told reporters.

"After years of injuries and surgeries, he comes back very strong, very fit, plays really well on faster surfaces."

"He made a couple really good matches here and he was on the roll (sic), so it was a really tough match," said Djokovic.

In the other quarterfinals, Toronto's own Milos Raonic lost to American John Isner. While Isner's fellow American and the 2011 Rogers Cup runner up, Mardy Fish, went down against a surging Richard Gasquet, who upset world's No.7 Tomas Berdych in two straight sets in day's first match at the main stadium.

Every player in the four quarterfinal matches played twice, as the tournament schedule was condensed after rain washed out play on Thursday.

Comments
Topics mentioned in this article
Tennis Mahesh Bhupathi Richard Gasquet Lukas Dlouhy Kim Clijsters Leander Paes Andy Murray Serena Williams Sania Mirza Novak Djokovic
Get the latest updates on ICC T20 Worldcup 2022 and CWG 2022 check out the Schedule, Live Score and Medals Tally. Like us on Facebook or follow us on Twitter for more sports updates. You can also download the NDTV Cricket app for Android or iOS.