Novak Djokovic admits he is relishing the chance to renew his friendly rivalry with Andy Murray at the ATP Tour Finals on Wednesday. 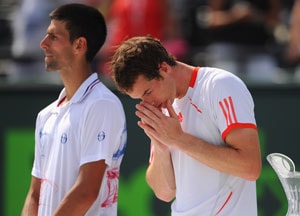 Novak Djokovic admits he is relishing the chance to renew his friendly rivalry with Andy Murray at the ATP Tour Finals on Wednesday.

World number one Djokovic has already spent years competing with Murray after the pair emerged onto the Tour at the same time but, with Roger Federer approaching the end of his career and Rafael Nadal hampered by knee problems, this could emerge as the sport's new great rivalry.

In 2012 alone they have clashed six times, with Djokovic starting the year with a thrilling victory over the Scot in the Australian Open semi-finals and Murray getting his revenge with an Olympic last four win and then, even more significantly, a five-set triumph over the Serb to win his first Grand Slam title at the US Open.

Djokovic won their most recent meeting in Shanghai final when he had to save five match points before clinching the victory, yet, despite the crucial nature of so many of their 16 meetings, there is no ill-feeling between the pair.

They practice together on a regular basis and did so on Saturday at the O2 Arena before learning a few hours later that they had been drawn in the same group in the season-ending Tour Finals.

"We practice with each other very often, whenever we can," Djokovic said.

"We are big rivals as well, but also very fair to each other. It is a very friendly relationship.

"I'm very glad to keep that relationship with Andy, somebody that I've known for a very long time."

After winning their opening group matches on Monday, Djokovic against Jo-Wilfried Tsonga and Murray against Tomas Berdych, they will meet on Wednesday with the victor almost certain to progress to the semi-finals.

With plenty at stake, there is every chance the clash will be the latest in a long line of gruelling encounters between two of the fittest and most dynamic players on the Tour.

"Playing Andy is always a big challenge. He has had lots of success in London, playing in front of his crowd with big support," Djokovic said.

"When I'm playing Andy I need to be ready for long rallies and a physically demanding match.

"We know a lot about each other. I'm sure we are going to come up with some really good tennis."

Following his shock exit from the Paris Masters against Sam Querrey last week, Djokovic admitted he needed the boost of regaining the world number one ranking on Monday and he looked a more vibrant figure in his 7-6 (7/4), 6-3 win over Tsonga.

"It's a huge satisfaction," he said. "Of course I want to win every match that I play. That's why I'm here. It's the season finale.

"But knowing in the back of my mind that I will end as number one is a huge relief for me and my team.

"Knowing how long the year was and how difficult and competitive it was with all my rivals just makes it even bigger."

Comments
Topics mentioned in this article
Tennis Andy Murray Novak Djokovic Rafael Nadal
Get the latest Cricket news, check out the India cricket schedule, Cricket live score . Like us on Facebook or follow us on Twitter for more sports updates. You can also download the NDTV Cricket app for Android or iOS.