Monfils, who conquered Roger Federer in the previous round, re-discovered his mojo at the start of the decider, rattling Djokovic, who hurled his racquet in disgust after one mistake. But it was the Serb who made the crucial break, in the seventh game, letting out of roar of triumph before going on to seal the match. 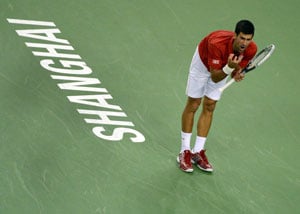 Novak Djokovic stayed on course for a potential blockbuster Shanghai Masters title match against Rafael Nadal on Friday, surviving a withering assault from Frenchman Gael Monfils to win his quarter-final 6-7 (4/7), 6-2, 6-4.

Elsewhere in last-eight action, Jo-Wilfried Tsonga and Juan Martin del Potro breezed through their matches in straight sets as they hunt berths at next month's elite World Tour Finals.

In a first set full of brutal baseline tennis, Monfils and Djokovic swapped two service breaks each before the match settled into a more regular groove, going to a tie-break won by the Frenchman when the top seed went long with a backhand.

But Monfils, cutting an imposing figure in his bright orange top with a shock of dark hair, let his intensity slip at the start of the second set and Djokovic immediately seized the initiative with a break.

A time violation against Monfils rattled the Frenchman, who became embroiled in an argument with the umpire and was soon flat on his back receiving treatment on his stomach as the set slipped away from him.

Monfils, who conquered Roger Federer in the previous round, re-discovered his mojo at the start of the decider, rattling Djokovic, who hurled his racquet in disgust after one mistake.

But it was the Serb who made the crucial break, in the seventh game, letting out of roar of triumph before going on to seal the match.

The Argentine sixth seed, fresh from winning the Japan Open, stamped his authority on the match with an early break and sealed the first set with another, while a single break in the second set proved decisive.

He will next face either Nadal or Switzerland's Stanislas Wawrinka, and is just one win away from qualifying for next month's World Tour Finals in London.

"I played very well today, very solid," said Del Potro, who has overcome a fever in Shanghai. "I played aggressive. I hit my forehand very well. I like the way I played today. I just want to keep improving and keep going far in this tournament."

Del Potro, 25, is wary of a possible match-up with the Spanish world number one, describing him as "unbeatable". "You have to have a perfect day with Rafa. We'll see how it's going," he said.

Seventh seed Tsonga was equally impressive in securing a comfortable 6-2, 6-3 victory against 50th-ranked Florian Mayer of Germany in just 64 minutes.

Tsonga, who landed just 54 percent of his first serves but saved all four break points he faced, admitted he was not quite 100 percent fit after problems with his knee, which forced him to miss the US Open.

But he believes he will have a fighting chance against the top seed even though he has lost his past six matches against the Serb.

"He was the number one for many, many weeks, and he was playing well, he was confident," said Tsonga, 28.

"I think he lost more matches this year than the other years, so maybe it's an opportunity for me."

The top eight players of the season qualify for the World Tour Finals in London, with five places still up for grabs. Nadal, Djokovic and David Ferrer have already qualified.

Federer, who has won the end-of-season showpiece a record six times, is in grave danger of missing out this year after his third-round defeat on Thursday to Monfils.

Comments
Topics mentioned in this article
Tennis Roger Federer Gael Monfils Novak Djokovic Rafael Nadal Samantha Stosur
Get the latest updates on ICC T20 Worldcup 2022 and CWG 2022 check out the Schedule, Live Score and Medals Tally. Like us on Facebook or follow us on Twitter for more sports updates. You can also download the NDTV Cricket app for Android or iOS.