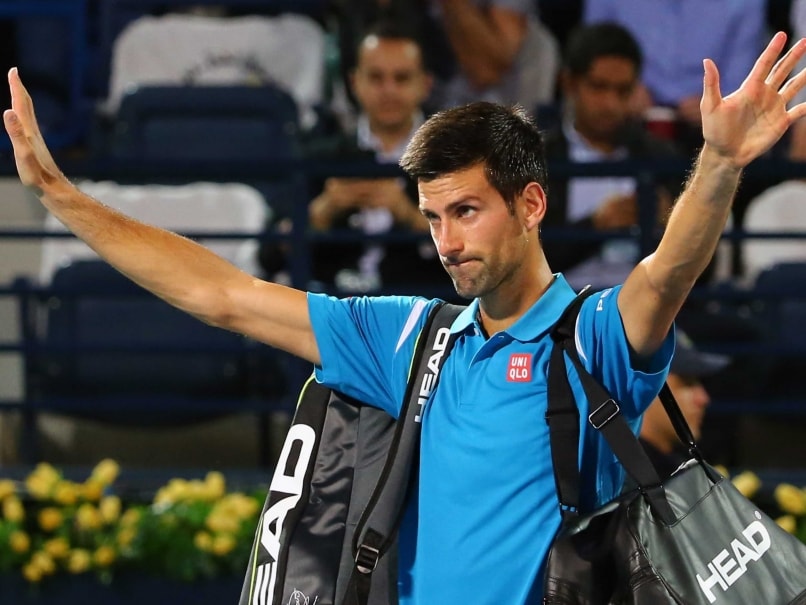 Novak Djokovic has been slammed by tennis fraternity for his comments.© AFP

World number one Novak Djokovic backed off comments that men's tennis players should make more than women on Tuesday as Serena Williams and Andy Murray led a stinging chorus of criticism at the remarks.

A furious row over the gender pay gap in tennis erupted at the weekend, when Indian Wells tournament director Raymond Moore said women should get "on their knees" to thank male players for money in the sport.

Moore was forced to apologize before resigning late on Monday.

Djokovic fueled the controversy however after stating that he believed the pay gap was justified, adding that women go through "hormones and different stuff."

Williams, who has won 21 Grand Slam singles crowns to 11 for Djokovic, condemned the Serbian star's remarks on Tuesday.

"It has been, I would say disappointing," Williams said. "I wouldn't say my son deserved more money than my daughter because he's a man. It would be shocking."

Djokovic has a 17-month-old son, Stefan, but Williams openly wondered how he would explain himself to a future daughter.

"He's entitled to his opinion," Williams said. "If he had a daughter, he has a son right now, he should talk to his daughter and say, 'Your brother deserves more money than you.'

"I would never use sex to compare. We have so many great players, men and women, who have brought so much vision to the sport. Every athlete works extremely hard.

"If I had a son and a daughter I would never tell them one deserves more because of their sex."

Britain's Murray even noted Djokovic's notion that men should receive less than women if their matches were less well attended, citing an example of how many would show up to watch who if Williams and Ukraine's Sergiy Stakhovski each had a match in a ticketed session.

"I think there should be equal pay 100 percent," Murray said.

"The whole thing doesn't stand up. It depends on the matches day by day. The men's game has had some great rivalries for the past few years. The whole of tennis should strengthen from that, not just the men's game."

Djokovic later issued a statement on Facebook, offering a qualified apology for his comments, which he said had been made while he was affected by the "euphoria and adrenalin" of his win at Indian Wells.

"I've made some comments that are not the best articulation of my view, and I would like to clarify them," Djokovic said.

"We all have to fight for what we deserve. This was never meant to be made into a fight between genders and differences in pay, but in the way all players are rewarded for their play and effort.

"This was my view all along and I want to apologize to anyone who has taken this the wrong way."

Murray meanwhile said he was baffled to hear of Moore's outburst ahead of Sunday's final, where Williams lost 6-4, 6-4 to Victoria Azarenka.

"You had it before a great women's final with 16,000 people," Murray said. "The whole thing was pretty strange and pretty disappointing coming right before a final like that. It didn't make sense."

Women's tennis found other defenders, such as Japan's Kei Nishikori.

"We are training 100 percent the same as the men. We're more troubled with hormones and other things? He should not have said what he said."

"What he said was not right at all," said two-time Grand Slam champion Stan Wawrinka.

"We work so hard for this, spend so much time practicing. I don't think we do any less than the men," Poland's Agnieszka Radwanska said. "We don't deserve less prize money."

Comments
Topics mentioned in this article
Novak Djokovic Serena Williams Andy Murray Kei Nishikori Agnieszka Radwanska Petra Kvitova Tennis
Get the latest updates on India vs England Series, India vs England , live score and IPL 2021 Auction . Like us on Facebook or follow us on Twitter for more sports updates. You can also download the NDTV Cricket app for Android or iOS.