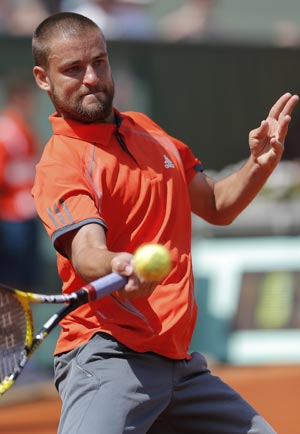 Mikhail Youzhny reached his first final at the Swiss Open on Saturday with a 6-3, 6-3 workmanlike win over 2008 champion Victor Hanescu.

The Russian, who finished runner-up to Roger Federer last month on grass at Halle, will Sunday play the winner from the day's second semi, when Spanish fifth seed Feliciano Lopez takes on Dutchman Robin Haase.

The sunny week in the Alps week had been driven by hype and expectation with Federer and fellow Swiss Stanislas Wawrinka heading the field.

But with both of the flash drawcards making premature exits having been hampered by back injuries during the sellout week, it is the no-nonsense 31-year-old journeyman Youzhny who finds himself playing for the title.

Organisers who sold out all tickets for the final the moment Federer announced his return after nine years away, are hoping that the stands will still be relatively full for what will be a less prestigious final.

"I made a semi-final in 2011 but it's great to go even further," said Youzhny, who saved three match points in his quarter-final against Juan Monaco.

"Even during the times when I had lost early here, I would stay around all the week.

"I love it here, it's so beautiful," he said of the VIP hideaway located at 800 metres above sea level.

Youzhny, ranked 33rd and winner of eight ATP titles, dealt Hanescu a first service break of the week in the opening set, finishing with seven aces in the 71-minute contest.

Youzhny admitted that while he won, he did not play his best game to reach his 21st career final.

"I was a bit tired from match of yesterday and I think it showed," said the Russian.

"There were a lot of mistakes from both of us. But I did what I could to play my tennis and try to win."

After claiming the opening set in bright sunshine, Youzhny went up a break for 3-2 in the second but had to save a break point in the next game to earn a 4-2 margin.

The Russian put Hanescu under pressure a game later, with the Romanian saving three break points while receiving two time violation warnings. Youzhny closed out his 24th win of the season two games later on a first match point.

The pair continued the run of success for players older than 30 this season on the ATP tour. So far in 2013, 16 of them have reached finals.

The last Russian to play the Gstaad final was Igor Andreev - a runner-up to Hanescu in 2008 - with Yevgeny Kafelnikov claiming the last title here for Russia in 1995.