The former world number three from Russia's 6-1, 6-1 win over Simone Bolelli, the world number 83 from Italy, was the quickest of the tournament and maintained his hopes of regaining the Qatar Open title he so spectacularly won three years ago. 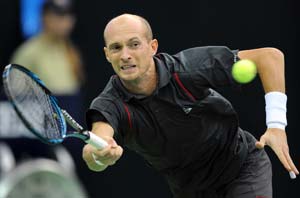 Nikolay Davydenko stormed into the Qatar Open semi-finals on Thursday with an express train performance which gave him a chance of earning a first final for 20 months.

The former world number three from Russia's 6-1, 6-1 win over Simone Bolelli, the world number 83 from Italy, was the quickest of the tournament and maintained his hopes of regaining the Qatar Open title he so spectacularly won three years ago.

Davydenko did that by becoming one of only two players at that time who had beaten Rafael Nadal and Roger Federer in the same tournament, and he might have gone on to other glories had he not broken his wrist only two months later.

Now though the manner of his third successive straight sets win - lasting only 49 minutes - hinted at more triumphs still being possible for a 31-year-old whose last season on the ATP World Tour this may be.

"I was enjoying this today," said Davydenko, whose movement to early taken, flat ground strokes was pulverisingly effective.

"In the beginning I was nervous, but then I was moving good."

His buoyant mood belied the fact that he has not completely erased the aches and pains which have dogged him and dragged him down to 44 in the rankings in the last two years.

"Players are never one hundred percent fit in the body - if I die, yes, we have no pain," smiled Davydenko.

But his new optimism still shone through.

"I have been in the semi-finals five times here now," he pointed out. "I like it here and maybe this is my tournament."

That sounded a little bit like a veiled warning to David Ferrer, the top-seeded Spaniard whom Davydenko plays on Friday.

Ferrer however has also gathered form and confidence as the tournament has progressed.

He needed only 10 minutes longer than Davydenko to complete a 6-0, 6-3 win over Paolo Lorenzi, the world number 63, capturing 24 of the last 28 points.

It suggested he might be capable of repeating his form of last season, the most successful of his career.

"Yesterday and tonight I had a very good feeling - tomorrow maybe I will not play better, no, but I am trying to be focused, to win," Ferrer said though he rejected any suggestion that he might go on and challenge any of the four Grand Slam champions.

"That's very difficult. At the moment the top four, they are better than me," he replied, even though it is highly likely Ferrer will overtake the injured Nadal and climb to world number four during the Australian Open starting in 10 days' time.

The other semi-final has a surprise survivor.

He is Daniel Brands, a little-known German qualifier ranked outside the world's top 150, who continued a stunning surge into the limelight by producing his second upset of the week and reaching the first ATP World Tour semi-final.

The six-foot five-inch purveyor of old-style one-strike tennis upset the fifth-seeded Jeremy Chardy on Tuesday, and now imposed his staccato rallies upon another Frenchman, Gael Monfils, last year's runner-up, in a 6-1, 7-5 victory.

Monfils has hopes of regaining a place in the world's top 10 during 2013 after recovering from persistent injury, and looked certain to pull back to one set all against after getting within two points of it at 5-2, 30-love in the second set.

But a startling quarter of an hour from Brands changed everything.

The hard-serving, sharp-volleying man from Bogen launched a sequence of winners, taking 20 of the next 23 points, making two breaks of serve in a row, and steam-rollering five successive games to snatch an improbable victory.

Brands will now play his third Frenchman in four rounds - Richard Gasquet, the number two seed, who enjoyed a 6-1, 6-3 win over Lukas Lacko, the world number 50 from Slovakia.

Comments
Topics mentioned in this article
Tennis Roger Federer Nikolay Davydenko Andy Murray Shahar Peer Svetlana Kuznetsova Francesca Schiavone
Get the latest updates on ICC T20 Worldcup 2022 and CWG 2022 check out the Schedule, Live Score and Medals Tally. Like us on Facebook or follow us on Twitter for more sports updates. You can also download the NDTV Cricket app for Android or iOS.