For the first time, the host nation fielded two teams in the tournament, and Nick Kyrgios and Daria Gavrilova went through the week unbeaten as Australia Green, culminating in their 2-0 win over Ukraine to give Australia their second Hopman Cup title. 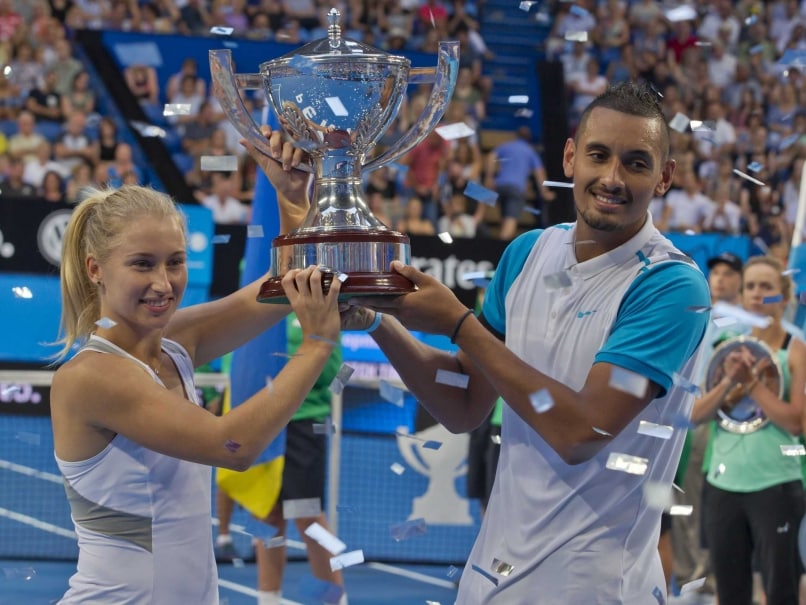 For the first time, the host nation fielded two teams in the tournament, and Kyrgios and Gavrilova went through the week unbeaten as Australia Green, culminating in their 2-0 win over Ukraine to give Australia their second Hopman Cup title.

Both players won their singles matches in the final in straight sets, with the mixed doubles not being played.

For both Australians, who have known each other for several years, it was a milestone tournament win.

Kyrgios collected his first senior ITF tournament title just four months after he was dumped from the Davis Cup team for the semi-final against Great Britain.

Gavrilova was representing her adopted country for the first time, having been naturalised last month.

"It means a lot, it is my first real title to have won," Kyrgios said.

"It is the perfect way to start the year, I haven't lost a match yet and I am riding a lot of confidence into the Australian summer.

"I have known Dasha for a long time and it is pretty special."

Gavrilova could scarcely believe her luck.

"It is the biggest event I have ever won and just representing Australia for the first time and winning this title straight away is amazing," she said.

The pair were just one point from being eliminated from the tournament when they faced a match point against France in the deciding mixed doubles on Friday night, however they were in total control in the final.

In the opening match, the women's singles, world number 36 Gavrilova upset the 19th-ranked Svitolina in straight sets, courtesy of a stunning finish to the second set tiebreak.

The pair have played doubles together, and the familiarity with each other's games was evident in a fluctuating match.

Having taken the first set Gavrilova twice found herself up a break in the second and served for the match at 5-4.

However, Svitolina then appeared to have the set in her keeping when she led 6-1 in the tiebreak, only for the Australian to peel off the next seven points in succession for an unexpected win, 6-4, 7-6 (8/6).

"I just told myself I was going to play a third set, so I just played free," Gavrilova explained.

It was Svitolina's first singles loss of the week, having posted three previous victories.

Kyrgios then used his booming serve to good effect to cruise past Dolgopolov, who had also been unbeaten in singles, in just under an hour, 6-3, 6-4, and claim the final.

Australia's only previous title was when Mark Phillippoussis teamed with teenager Jelena Dokic in 1999, while Ukraine have been beaten twice in the Hopman Cup final, previously in 1995.

Comments
Topics mentioned in this article
Nick Kyrgios Daria Gavrilova Elina Svitolina Alexandr Dolgopolov Tennis
Get the latest updates on IPL 2021, IPL Points Table , IPL Schedule 2021 , live score . Like us on Facebook or follow us on Twitter for more sports updates. You can also download the NDTV Cricket app for Android or iOS.