Nadal has enjoyed one of the best spells of his career after he came back from seven months out to win two major titles, but he is still seeking further accolades. 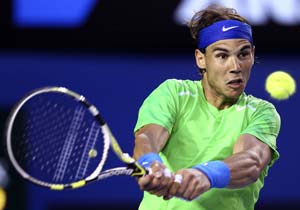 Newly re-crowned world number one Rafael Nadal can smash the record for Masters titles claimed in a year in Shanghai this week, as his great rival Roger Federer fights to save his season.

Nadal has enjoyed one of the best spells of his career after he came back from seven months out to win two major titles, but he is still seeking further accolades.

After replacing Novak Djokovic at the top of the ATP rankings -- despite his loss to the Serb in Sunday's China Open final -- Nadal can now become the first man to win six Masters trophies in the same season.

And the remorseless Mallorcan said he's also motivated by the target of finishing the year as world number one for the third time in his career.

"If I am able to be number one at the end of the season, then that's an important achievement because I will be the best of the year," he said.

"That's something that really motivates me."

Since returning in February after his long spell on the sidelines with a left knee injury, the Spaniard has won 10 titles, including the French Open and US Open.

Until Sunday's loss to Djokovic, he had been unbeaten since his early exit at Wimbledon, where he was a shock first-round loser to Belgium's Steve Darcis.

"This is a great year, one of the best years of my career without any doubt," said Nadal, who is now just four Grand Slam titles shy of Federer's record of 17.

"It sure is special to be back to the top position of the rankings after more than a half-year without playing tennis."

Second seed Nadal equalled Djokovic's record of five Masters titles in a season by winning at Cincinnati in August. He was previously year-end world number one in 2008 and 2010.

Federer, by contrast, has endured a wretched year by his standards and risks missing out on the season-ending World Tour Finals, currently held in London, for the first time since 2001.

He has won the event, which features the season's top eight players, a record six times. But Federer, down to seventh in the latest ATP rankings, has won just a single title this year and did not reach any of the Grand Slam finals.

With the season entering its final few weeks, the Swiss still has work to do to reach the end-of-year showpiece, lying seventh in the Race to London.

But Federer has a tough task in Shanghai, slated to meet defending champion and top seed Djokovic in the quarter-finals.

Before he even contemplates that match-up he must get past either Australian warhorse Lleyton Hewitt or Italy's Andreas Seppi in his opener.

"It is always a tough draw here because it is always such a strong tournament," said fifth seed Federer, who has a bye into the second round.

"It's a difficult first match for me," he added. "It would be great to play Lleyton. We go back a long way and I remember playing him in Shanghai when the first Masters Cup was here.

"He beat me in the semi-finals and went on to win the tournament. We have had some amazing matches. Even if I play Seppi, that will also be tough because he is a very good player."

Nadal, Djokovic and two-time Shanghai champion Andy Murray have guaranteed their spots for next month's World Tour Finals, but the Briton is expected to skip the season-ender after back surgery.

Also pushing for places in London are French pair Richard Gasquet and Jo-Wilfried Tsonga plus Canada's Milos Raonic, forcing Federer to look nervously over his shoulder.

Comments
Topics mentioned in this article
Tennis Novak Djokovic Gael Monfils Rafael Nadal Roger Federer Samantha Stosur
Get the latest updates on ICC T20 Worldcup 2022 and CWG 2022 check out the Schedule, Live Score and Medals Tally. Like us on Facebook or follow us on Twitter for more sports updates. You can also download the NDTV Cricket app for Android or iOS.