Rafael Nadal struggled past 148th-ranked qualifier Paolo Lorenzi 6-7 (5), 6-4, 6-0 in his opening match at the Italian Open on Wednesday, looking far from the form that has helped him dominate on clay for six years. 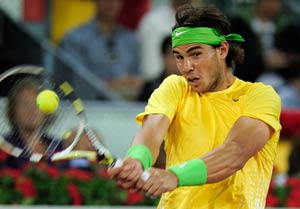 Rafael Nadal struggled past 148th-ranked qualifier Paolo Lorenzi 6-7 (5), 6-4, 6-0 in his opening match at the Italian Open on Wednesday, looking far from the form that has helped him dominate on clay for six years.

It marked the third consecutive match in which Nadal dropped the first set, having also rallied to beat Roger Federer in the Madrid Open semifinals and then losing in straight sets to Novak Djokovic in Sunday's final. Nadal has never lost consecutive matches on his favorite surface.

Djokovic stretched his unbeaten start this year to 33 matches with a 6-0, 6-3 win over Polish qualifier Lukasz Kubot earlier. The Serb has a chance to take the top ranking from Nadal if he wins this tournament and Nadal fails to reach the semifinals.

The event at the Foro Italico is a key warmup for the French Open, which starts in 11 days.

Nadal struggled with his forehand against Lorenzi, consistently sending routine shots from the center of the court into the net during the opening two sets.

In all, Nadal committed 35 unforced errors to Lorenzi's 34.

Lorenzi beat Madrid semifinalist Thomas Bellucci in the first round and has never won back-to-back matches at a Masters Series event. The crowd was clearly behind the Siena resident, chanting "Paolo, Paolo" after every big point he won.

In the second set, Nadal wasted an early break before Lorenzi netted a backhand to hand Nadal a 5-4 lead, after which the Spaniard served out the set and never looked back.

Nadal's match came in sharp contrast to the dominating performance of Djokovic, whose unbeaten streak trails only John McEnroe's 42-0 start in 1984 in the Open era.

Many spectators were still getting to their seats by the time Djokovic wrapped up the first set in 23 minutes, and the 141st-ranked Kubot was so overwhelmed that he fell to the clay on his backside after chasing down one too many shots during the opening point of the second set.

The Pole finally won a game at 6-0, 3-0 when he landed a drop volley winner, drawing an ironic applause from the crowd. But Djokovic wrapped it up in 67 minutes.

"It's always great to have a straight-set win and spend less time on the courts and save some energy for coming rounds," he said.

Overall, Djokovic has won 35 consecutive matches stretching back to Serbia's Davis Cup triumph in December, tying him for sixth in the Open era with Bjorn Borg (1978), Thomas Muster (1995) and Roger Federer (2005).

Djokovic's next opponent will be 14th-seeded Stanislas Wawrinka, who overcame a challenge from Italian wild card Filippo Volandri 6-1, 3-6, 6-2.

Djokovic beat Wawrinka in the 2008 final here, the only time in the last six years when Nadal failed to win this tournament.

"He likes this court and these conditions," Djokovic said. "It's going to be a tough match."

Federer, who has never won this tournament, could be challenged by Jo-Wilfried Tsonga in a night match at the Foro Italico.

Comments
Topics mentioned in this article
Tennis Svetlana Kuznetsova Stanislas Wawrinka Richard Gasquet Feliciano Lopez Andy Murray Paolo Lorenzi Rafael Nadal Novak Djokovic
Get the latest updates on IPL 2020, check out the IPL Schedule for 2020 and Indian Premier League (IPL) Cricket live score . Like us on Facebook or follow us on Twitter for more sports updates. You can also download the NDTV Cricket app for Android or iOS.