Gael Monfils made back-to-back quarterfinals by ousting sixth-seeded Victor Troicki of Serbia 7-5 7-5 in the second round of the Thailand Open on Thursday. 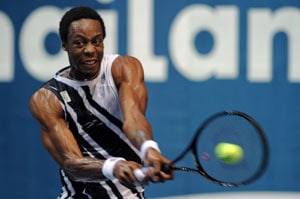 Gael Monfils made back-to-back quarterfinals by ousting sixth-seeded Victor Troicki of Serbia 7-5 7-5 in the second round of the Thailand Open on Thursday.

Monfils reached the last four last week in Metz, his first tournament since May because of a right knee injury.

The Frenchman used five breaks of serve to trump the three he lost to beat Troicki a third straight time.

"Victor was a bit better than me at the beginning of the match. He tried many things," Monfils said. "Then I switched a bit, I tried to slice more and be more aggressive. Then it was a fight, rallying around the court. Eventually I got through to win."

In the quarterfinals he'll meet countryman and 2009 champion Gilles Simon, who defeated Go Soeda of Japan 6-4, 6-4.

Bernard Tomic of Australia booked his first quarterfinal since April by edging Dudi Sela of Israel 4-6, 6-3, 6-4.

"He played well, I didn't play as good as I did in the first round," Tomic said. "I didn't play aggressive enough. But it's difficult with a player like that. He is unusual. I think I'm lucky."

Raonic hit 14 aces to nine, and converted his only break point chance of three while offering no chances to Karlovic in Impact Arena.

"I was a bit hesitant in the first set, and tried to figured out (the indoor court) in the second," Raonic said.

Next for him will be Jarkko Nieminen of Finland.

Also, Fernando Verdasco of Spain accounted for Donald Young of the U.S. 7-5, 6-4.