Juan Monaco defeated Andrey Golubev 6-3, 6-0, 6-4 to give Argentina a 1-0 lead over Kazakhstan in the Davis Cup quarter-finals on Thursday. 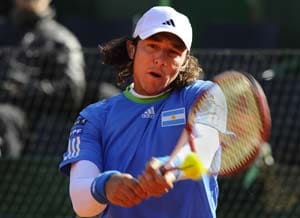 Juan Monaco defeated Andrey Golubev 6-3, 6-0, 6-4 to give Argentina a 1-0 lead over Kazakhstan in the Davis Cup quarter-finals on Thursday.

Juan Martin del Potro was to face Mikahil Kukushkin in the second singles on outdoor clay at Parque Roca.

Doubles are set for Friday, with reverse singles on Saturday.

Play started a day earlier than usual because of elections on Sunday in Buenos Aires.

"This was the kind of match, no matter how much you are leading, you have to maintain your concentration 100 percent," Monaco said.

Argentina is trying to win its first Davis Cup title. The South Americans were runners-up in 2006 and 2008 and are playing the 10th consecutive time in the quarter-finals.

Comments
Topics mentioned in this article
Tennis Novak Djokovic Juan Monaco Philipp Kohlschreiber Rafael Nadal Jan Hajek Andrey Golubev
Get the latest updates on IPL 2020, check out the IPL Schedule for 2020 and Indian Premier League (IPL) Cricket live score . Like us on Facebook or follow us on Twitter for more sports updates. You can also download the NDTV Cricket app for Android or iOS.