Nadal has had a sensational year, winning 10 titles including two Grand Slams after seven months out with a left knee injury. 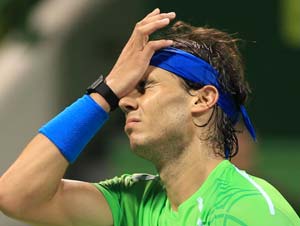 Rafael Nadal on Tuesday revealed he's still in pain despite his titanic form since returning from injury -- and played down suggestions a hi-tech treatment was behind his amazing comeback.

Nadal has had a sensational year, winning 10 titles including two Grand Slams after seven months out with a left knee injury, and displacing Novak Djokovic as world number one in the latest rankings.

Britain's Daily Mail newspaper on Monday said the use of hi-tech training machinery and platelet-rich plasma therapy (PRP) were key reasons for the Spaniard's revival.

But the 27-year old told reporters at the Shanghai Masters that while a combination of machines and PRP had "worked unbelievable" on his knee in the past, there was no magic cure this time around.

"The machines I have at home, the only thing that helps me is to make me a little bit more fit without having to run or something like this, or putting pressure on the tendon.

"But seriously, we didn't find the key to the recovery because I need to keep working hard on finding things that will help me more."

PRP, known as "blood-spinning", involves taking an athlete's blood and spinning it in a centrifuge to increase the platelet count. It is then re-injected in the affected area.

The practice is not banned and was removed from the World Anti-Doping Agency's prohibited list for 2011.

Nadal said his team was working constantly to find solutions to manage his knee, which he admitted was "not 100 percent perfect".

"But the feeling on the knee is very good for me because even if I have pain a lot of days, the pain is not limiting my movements," he said.

"That's the most important thing. I am playing with no limitations. I am free when I am playing.

The Mallorcan, whose US Open victory last month gave him 13 Grand Slam wins -- just four behind Roger Federer -- said it was special to be world number one again, a chance he did not believe he would have.

But despite his phenomenal success on hardcourts this year, Nadal, who has been consistently plagued by knee problems, said he still believed that too much tennis is played on the surface.

"I say this because I think it's going to be better for the next generations, if they are able to play on an easier surface for the body, to try to have a longer career, to try to be more healthy when they finish their careers," he said.

"Probably I will not be that lucky."

Nadal has continually defied dire predictions that the wear and tear from his intense, physical style would end his career early.

And he said he hoped to prove the doubters wrong again by playing on to the 2016 Olympics in Rio de Janeiro, when he will be 30.

"For the last five years, it seems like lot of people were saying I will not be able to play long the way that I play," said Nadal, Olympic singles champion in 2008.

"But I am here again at 27-and-a-half years old and I really hope to have the chance to be here for a lot of more years.

"So still in my mind Olympics in Brazil. I really want to arrive there in good condition. It's a real goal for me."

Nadal missed last year's Olympics, when he was defending champion, with his knee injury.

In Shanghai he can become the first man to win six Masters titles in one year, an achievement which would add further gloss to his remarkable season.