Djokovic will take on German veteran Tommy Haas for a place in the quarter-finals. 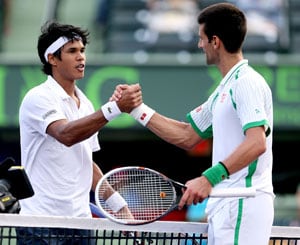 World No. 1 Novak Djokovic cruised into the fourth round of the Miami ATP Masters and WTA tournament on Sunday with a 6-2, 6-4 victory over India's Somdev Devvarman.

Djokovic remained on course for a third straight title on the hard courts of Key Biscayne -- a fourth overall -- and will battle German veteran Tommy Haas for a place in the quarter-finals.

The 25-year-old Serbian, who won the title in 2007, 2011 and 2012, had little trouble against Devvarman, who has fallen to 254th in the world after a near-seven month absence last season with a shoulder injury.

Djokovic, who saw a 22-match winning streak halted in the semi-finals at Indian Wells last week, hasn't lost to a player outside the top 100 since 2010.

Devvarman never looked like reversing that trend against the Serbian, who has reached the final in Miami every time he has made it past the second round.

"Considering the wind, it was a nice day," Djokovic said.

"Conditions not so great. It was very difficult to kind of get into the rhythm because you couldn't really serve at your 100 percent and you had to go more for precision and you had to put twice as much effort in the step adjustments.

"All in all, I'm just happy to get through the rough day."

In other men's action, third-seeded David Ferrer of Spain continued his dominance of Italian Fabio Fognini with a 6-1, 7-5 victory.

Ferrer broke Fognini four times en route to the victory in 79 minutes. It was his third win over the Italian this season and his sixth in six career meetings.

Ferrer, winner of two titles already this season, was playing his first match of the tournament after advancing to the third round on a walkover when his scheduled opponent Dmitry Tursunov of Russia withdrew.

The 30-year-old Spaniard will battle for a quarter-final berth against 13th-seeded Nishikori, a 6-2, 7-5 winner over Belgian Xavier Malisse.

The two have split their four prior encounters 2-2. Ferrer triumphed in their last meeting, notching a straight-sets victory over the Japanese in the fourth round of the Australian Open.

"It's going to be a very difficult match," Ferrer said. "The last time I played him at the Australian Open I beat him in three sets, but I will have to run a lot. We will play a lot of rallies on the baseline. Nishikori has unbelievable shots. He plays with a lot of power."

Haas, the 15th seed, set up his shot at Djokovic with a 6-3, 6-2 win over Ukrainian Alexandr Dolgopolov.

Sharapova was broken early to fall 1-3 down in the opening set, but battled back on a muggy afternoon to book a fourth-round clash with Czech Klara Zakopalova, who ousted Maria Kirilenko 6-2, 7-6 (7/4).

After leveling the first set at 3-3, Sharapova held on to break Vesnina in a marathon seventh game that went to deuce seven times.

Vesnina finally surrendered her serve with a double fault on break point.

"It was a very important game," Sharapova said. "After I broke back, I held my serve, I felt like I had a bit of momentum.

"But then with that game you swing back and forth. That was a very important game."

Sharapova never trailed from there, benefitting from eight double-faults from her opponent.