Djokovic's ouster has left Ferrer as the highest seed remaining in the top half of the men's draw. 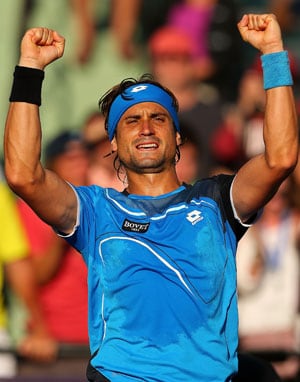 Third-seeded Spaniard David Ferrer quieted his early nerves and battled back for a three-set victory over Austrian veteran Jurgen Melzer on Wednesday to reach the semi-finals of the Miami ATP Masters.

Haas, at 34 the oldest player ranked in the top 50 in the world, had shocked Djokovic in straight sets in the fourth round on Tuesday.

Djokovic's ouster left Ferrer as the highest seed remaining in the top half of the men's draw.

Perhaps the Spaniard felt the pressure of that status in the first set against Melzer.

He grabbed a quick break for a 2-0 lead, but the Austrian left-hander reeled off the next five games to serve for the set at 5-2.

Ferrer gained another break, and held to extend the set, but Melzer fended off two break points in the 10th game to pocket the set.

"Well, I started good with 2-0 up, but he played very good and he played with great power with his shots," Ferrer said. "And when he broke me, I played not so good.

"I was a little bit nervous in the first set and part of the second, but I tried to fight every point, to be focused, and I had a good feeling in the end of the second set and of course in the third one."

Ferrer broke Melzer for a 3-1 lead in the second, and although the Austrian immediately broke back Ferrer was able to regain the advantage with a break for 4-2.

By the third set, he was rolling, his cause aided by the 23 forehand errors Melzer scattered through his match.

Ferrer hadn't made it to the final four at Miami since 2006, when he lost to Roger Federer in the semi-finals.

He was toppled in the second round of the Indian Wells Masters immediately prior to Miami, although until then he'd been enjoying a fine season that included titles at Auckland and Buenos Aires and a runner-up finish Acapulco.

Ferrer has won more matches this season -- 24 -- than any other player. He's also due to jump back over compatriot Rafael Nadal for the world No. 4 ranking next week, but Ferrer said he didn't mind working in relative anonymity.

"I'm very happy with me, with my career of tennis," he said. "I don't mind a lot (whether) I am a more important player or not. I like playing tennis and it's my job."