Murray, who is the lone British champion in tournament history, next faces Spaniard David Ferrer, who ended the brilliant run of Germany's Tommy Haas 4-6, 6-2, 6-3. 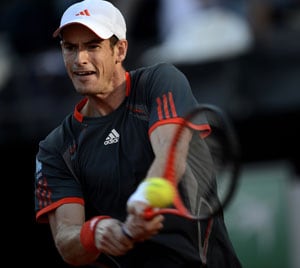 Former winner and last year's runner up Andy Murray rallied from a set down to beat Frenchman Richard Gasquet 6-7 (3/7), 6-1, 6-2 to reach the final of the ATP Tour's Miami Masters on Friday.

The 2009 champion Murray dropped his first set of the tournament by losing the opening-set tiebreaker to eighth seed Gasquet, but he quickly made amends and dominated the final two sets to reach his third career Miami final.

Murray, who is the lone British champion in tournament history, next faces Spaniard David Ferrer, who ended the brilliant run of Germany's Tommy Haas 4-6, 6-2, 6-3.

The 26-year-old Scot clinched the win when Gasquet hammered a return of serve on his forehand into the bottom of the net on the first of two match points.

Murray finished with six aces and won 75 percent of his first-serve points in the centre court match that ended just one minute shy of being two hours long.

Murray started slowly, struggling with his serve at times as he double faulted five times in the match, including three times in the opening set.

Murray has now won five of eight career matches against Gasquet, who was hampered in the final two sets by a right foot problem.

Gasquet, who has won twice already this year, was trying to become the first Frenchman to capture the Miami title.

Murray made it to the semi-finals without dropping a set but that string ended when Gasquet beat him in the tiebreak.

That came after Murray looked to be in control by winning five of six games in the middle of the opening set. Up 5-4 and serving for the set, Murray double faulted to allow Gasquet to level at 5-5.

Gasquet then went on to win the tiebreaker on the first of three set points when Murray hit a backhand long.

Gasquet received treatment from the trainer during the break between the second and third set for a problem with his right foot.

But it didn't seem to help as Gasquet grimaced throughout the third set.

Murray smacked a superb running cross-court forehand winner to reach match point in the eighth game of the final set.

That set up a double match point and Murray wasted no time winning it on his first serve.