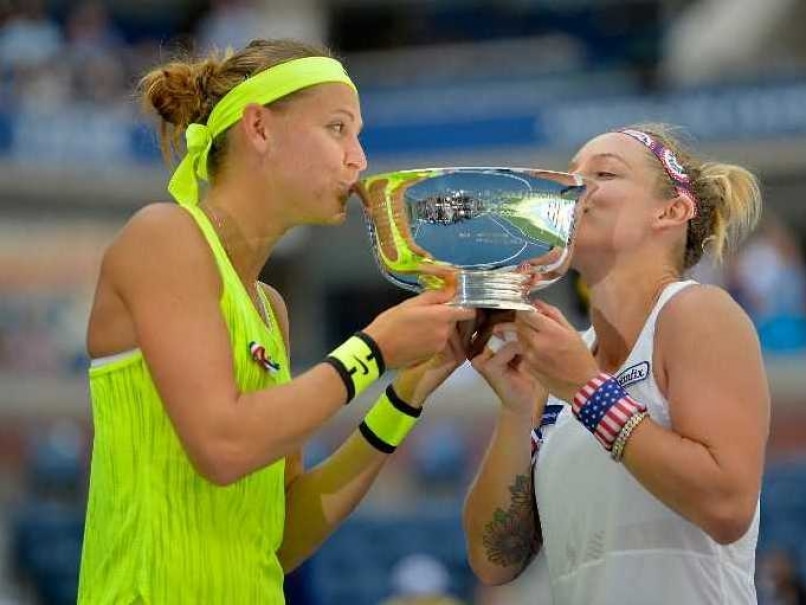 Bethanie Mattek-Sands of the United States and Lucie Safarova of the Czech Republic won the US Open women's doubles title for their third Grand Slam trophy as a pair, beating the top-seeded French team of Caroline Garcia and Kristina Mladenovic 2-6, 7-6 (5), 6-4 on Sunday.

Mattek-Sands is the first American to win women's doubles at Flushing Meadows since 2011, when Liezel Huber and Lisa Raymond did it.

The final was played on the 15th anniversary of the 9/11 terrorist attacks, and Mattek-Sands wore knee-high socks and a left wrist band with the same red-and-white-striped, star-spangled design she did while teaming with Jack Sock to win a gold medal in mixed doubles at the Rio Olympics last month.

"To have this result here has been amazing," Mattek-Sands told the Arthur Ashe Stadium crowd during the trophy ceremony, her eyes welling with tears and her voice choking on her words. "It's a special day today here for everybody in New York."

She and Safarova, who were seeded 12th, added this championship to those from the Australian Open and French Open in 2015.

They trailed by a set and a break on Sunday before coming all the way back. They broke for the first time in the match when Garcia served for the victory at 5-4 in the second set.

Mattek-Sands and Safarova broke Garcia again in the opening game of the third set.

"Oh, my God, I'm still overwhelmed with what just happened," Safarova said. "We were both injured throughout the year, but we stuck together."

For the runners-up, this was nearly a perfect way to bounce back from their tough trip to the Olympics. Garcia and Mladenovic lost in the first round there, then were provisionally suspended by the French tennis federation for "damaging" its image by criticising officials over a clothing mix-up before that match.

Garcia and Mladenovic had not dropped a set in the tournament until the final, eliminating each of the women who won last year's US Open and are now with new partners - beating Martina Hingis in the semifinals, and Sania Mirza in the quarterfinals.

Garcia and Mladenovic only became doubles partners at the start of 2016, and in June, they became the first pair of Frenchwomen to win the French Open doubles trophy in 45 years. They have reached the finals at seven of their 15 tournaments together.

Comments
Topics mentioned in this article
Bethanie Mattek-Sands Lucie Safarova Caroline Garcia Kristina Mladenovic Tennis
Get the latest updates on IPL 2021, check out the IPL 2021 Schedule and Indian Premier League Live Score . Like us on Facebook or follow us on Twitter for more sports updates. You can also download the NDTV Cricket app for Android or iOS.