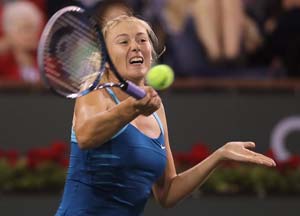 Sharapova progressed to the last eight after French qualifier Alize Cornet was forced to retire after the first game of the second set with a shoulder injury having lost the first set 6-3.

Comments
Topics mentioned in this article
Maria Sharapova Svetlana Kuznetsova Alize Cornet Yanina Wickmayer Caroline Wozniacki Gilles Muller Francesca Schiavone Tennis
Get the latest updates on India vs Australia Series, check out the India vs Australia Schedule for 2020-21 and Ind vs Aus live score . Like us on Facebook or follow us on Twitter for more sports updates. You can also download the NDTV Cricket app for Android or iOS.