Maria Sharapova tested positive at the Australian Open for Meldonium, a drug she said she had been taking since 2006 but one that was added to the banned list this year. 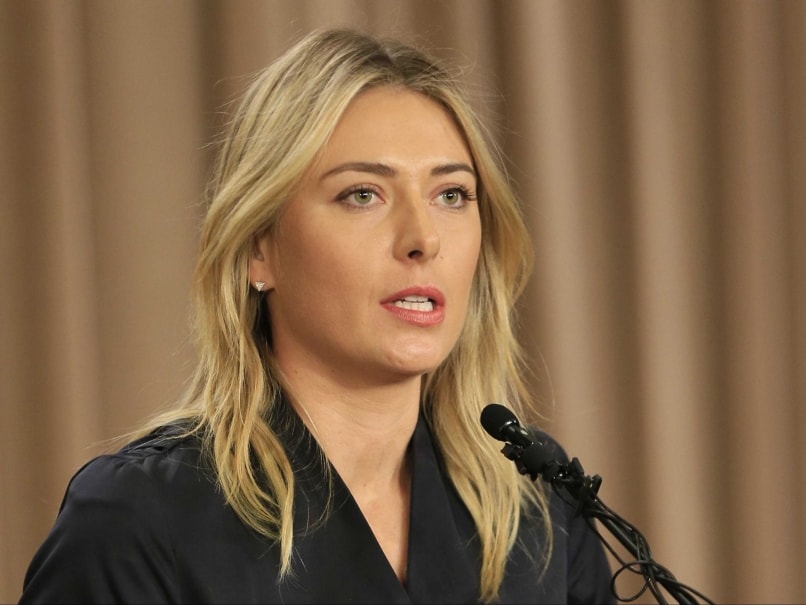 Maria Sharapova will be provisionally suspended with effect from 12 March, pending determination of the case.© AP
Los Angeles:

The former world number one from Russia said a change in the World Anti-Doping Agency's banned list for 2016 led to an inadvertent violation, which has left her "provisionally suspended" by the International Tennis Federation. (Nike Suspends Ties With Maria Sharapova)

Sharapova tested positive for Meldonium, a drug she said she had been taking since 2006 but one that was added to the banned list this year.

"I did fail the test and I take full responsibility for it," a sombre Sharapova said at a press conference at a downtown Los Angeles hotel.

"I made a huge mistake. I let my fans down. I let my sport down that I've been playing since the age of four that I love so deeply," added Sharapova, her voice wavering.

"I know that with this, I face consequences and I don't want to end my career this way -- and I really hope I will be given another chance to play this game."

The ITF confirmed in a statement that the former world number one from Russia had tested positive on January 26 and had accepted the finding when she was notified on March 2.

"Ms. Sharapova will be provisionally suspended with effect from 12 March, pending determination of the case," the ITF said.

Sharapova said she was cooperating with the ITF and did not yet know the extent of the sanctions she would face.

Her attorney, John Haggerty, said the positive test could carry a ban of up to four years, but that mitigating circumstances could see a lesser penalty.

Shamil Tarpishchev, head of the Russian tennis federation, promptly said he believed Sharapova would still have a chance to play at the Rio Olympics in August.

"I believe it's rubbish, nothing else," TASS news agency quoted Tarpishchev as saying. "The athletes take the medicines, which their physiotherapists or doctors recommend them to take. I believe Sharapova will nevertheless play at the Olympics.

"However, we need to wait and see how the things will go on."

Sharapova, 28, burst onto the international scene as she giggled and grunted her way to the Wimbledon crown in 2004.

Her ferocity on the court, business acumen and glamorous looks have all combined to make her a marketing juggernaut and the overseer of such successful ventures as her Sugarpova line of candy.

She has 35 WTA singles titles and more than $36 million in career earnings, and is currently ranked seventh in the world.

"I am very saddened to hear this news about Maria," WTA chief executive Steve Simon said in a statement.

"Maria is a leader and I have always known her to be a woman of great integrity. Nevertheless, as Maria acknowledged, it is every player's responsibility to know what they put in their body and to know if it is permissible."

Sharapova said she originally began taking Meldonium for a variety of worrying symptoms, including a tendency to become ill often, an irregular EKG heart test and a family history of diabetes.

Meldonium is used to treat heart trouble, including angina and heart failure.

It was added to the banned list beginning this year, with the World Anti-Doping Agency saying there was evidence it has been used by athletes with the intention of enhancing performance.

Several sports figures have tested positive for it this year, including Russian ice dancer Ekaterina Bobrova, whose positive test was revealed earlier on Monday.

WADA issued a statement saying officials were aware of Sharapova's case, but would not comment further until the ITF had ruled.

Sharapova has struggled with injuries during her career and has played just three tournaments since Wimbledon last year.

She pulled out of the 2015 US Open with a leg injury and withdrew from the tournament starting this week in Indian Wells, California with a left forearm injury.

Her most recent match was her Australian Open quarter-final loss to long-time rival Serena Williams.

The short-notice press conference promising a "major announcement" had sparked speculation that she might be preparing to announce her retirement.

"I know many of you thought I would be retiring today, but if I was ever going to announce my retirement it would probably not be in a downtown LA hotel with this ugly carpet," Sharapova said, trying with little success to inject a lighter tone into the proceedings.

Asked if the doctor who prescribed the drug should have been aware it was now banned, Sharapova refused to shift the blame.

"I have to take full responsibility for it," she said. "At the end of day, everything you do is about you."