Mahesh Bhupathi-Rohan Bopanna back together

Following an advantageous partnership in 2012 that saw them finish as finalists at the ATP World Tour Finals, Rohan Bopanna and Mahesh Bhupathi on Monday announced a renewal of their partnership 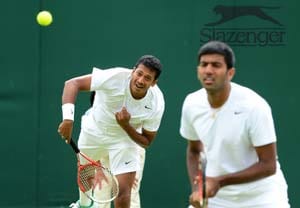 They experimented briefly with new partners earlier in the year, with Rohan Bopanna winning the Marseilles Open with Scottish partner Colin Fleming and Mahesh Bhupathi partnering Michael Llodra to win the Dubai Open.

Currently India's top two doubles players (ATP Rankings as on 1st April, 2013: Mahesh - No.10, Rohan - No. 12), they will be playing on the same side of the court, commencing with the Monte Carlo Masters. The duo believes that their experience of playing together on the tour during the 2012 season will hold them in good stead.

Speaking on the partnership Mahesh said, "We had a really good run last year, and had found a rhythm in our game while having a great time playing together. We have a refined understanding of each other's games, and gel well on and off the court... all strong characteristics that I know will translate into a successful partnership for us on the tour. Also as the country's top two doubles players, I don't think either of us could have asked for a more dependable partner."

Echoing Mahesh's sentiments, Rohan added, "Playing with Mahesh has been a great learning experience for me, and we make a formidable doubles team. While we will work towards improving on last year's performances, we do make a solid team in the knowledge that we have each other's back throughout."

As Bhupathi, a veteran of 52 men's doubles titles including 4 Grand Slams, and 8 mixed doubles Grand Slams, gets set to hang his boots following a long international career in tennis, playing alongside good friend and compatriot Bopanna may be the best way for him to bid adieu to the sport he loves.

Comments
Topics mentioned in this article
Tennis Mahesh Bhupathi Aisam-Ul-Haq Qureshi Su-Wei Hsieh Rajeev Ram Rohan Bopanna
Get the latest updates on Fifa Worldcup 2022 and check out  Fifa World Cup Schedule, Stats and Live Cricket Score. Like us on Facebook or follow us on Twitter for more sports updates. You can also download the NDTV Cricket app for Android or iOS.