Mahesh Bhupathi hints at retiring from competitive tennis next year

A former world No. 1 in doubles, Mahesh Bhupathi's recent form has been far below his lofty standards. The owner of 12 Grand Slam crowns has lost in the first round in the last three tournaments he has played. Bhupathi wants to focus on his business and even plans to start an international premier league in November 2014. 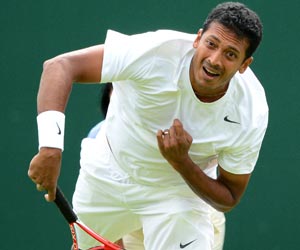 Leander Paes' dream of a doubles gold medal at the Rio Olympics in 2016 is unlikely to be true if Mahesh Bhupathi quits competitive tennis next summer. According to a newspaper report, Bhupathi may hang his boots next year after 18 gruelling years on the international circuit.

A former world No. 1 in doubles, Bhupathi's recent form has been far below his lofty standards. The owner of 12 Grand Slam crowns has lost in the first round in the last three tournaments he has played, clearly showing signs of fatigue as he crisscrosses the globe every week.

Speaking to a leading newspaper in Beijing on Monday, Bhupathi said: "I'm winding down. I'm playing the weeks I can play, going to the tournaments I want to go to before I call it a day next summer. I might still play a tournament or two this year and then a handful next year. I haven't yet decided which events and with whom I'll be playing."

Bhupathi, 39, is increasingly focusing on his business interests. He is planning an international tennis premier league next November that could see the world's leading stars like Rafael Nadal, Novak Djokovic and Andy Murray in action. As for his tennis on court, Bhupathi is no more the dominant force he once was.

Bhupathi has failed to make the cut for the season-ending championships, the ATP World Tour Finals in London next month, an event in which he has made five finals, including last year with Rohan Bopanna. He has no fixed partners and plays with whoever is available on a weekly basis.

"I'm still competitive." Bhupathi said. "I play to win. But now with my business interests and my daughter, I get over losses quicker. Sometimes I have a business meeting right after a match, so there's no time to think about the losses. I still enjoy playing and competing," he told the Times of India.

Comments
Topics mentioned in this article
Tennis Aisam-Ul-Haq Qureshi Rohan Bopanna Andy Roddick Mahesh Bhupathi Lukas Dlouhy Leander Paes Maria Sharapova
Get the latest updates on ICC T20 Worldcup 2022 and CWG 2022 check out the Schedule, Live Score and Medals Tally. Like us on Facebook or follow us on Twitter for more sports updates. You can also download the NDTV Cricket app for Android or iOS.