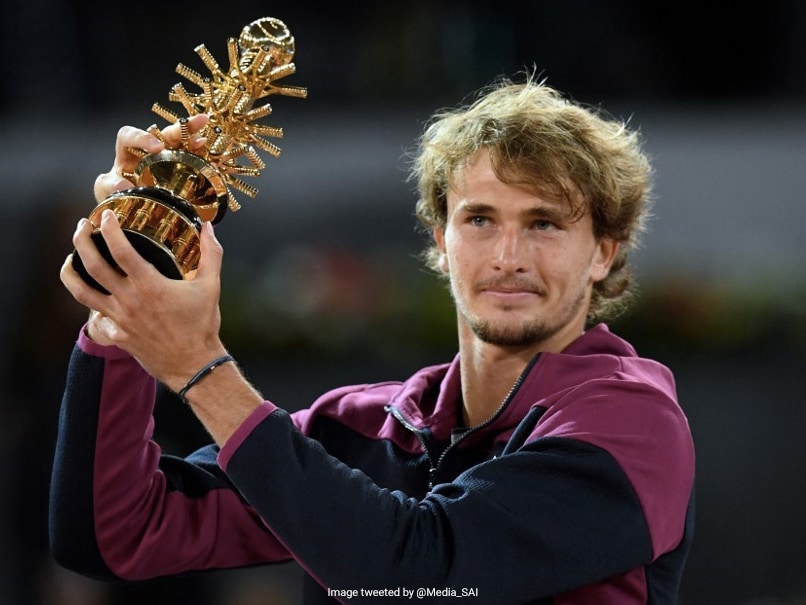 Alexander Zverev recovered from a set down to defeat Matteo Berrettini 6-7 (8/10), 6-4, 6-3 and win the Madrid Open for a second time Sunday as he clinched a fourth Masters 1000 title. The German fifth seed recorded his third consecutive top-10 victory this week, having eliminated five-time Madrid champion Rafael Nadal and Dominic Thiem to reach the final. Zverev, last year's US Open runner-up, added to his 2018 Madrid triumph as he denied Berrettini successive titles following the Italian's win in Belgrade last month.

"It is great (to win this title), especially after losing my last three finals I played at Masters 1000 events," Zverev said.

"This is definitely special and I just want to enjoy this one."

Zverev was full of praise for his Italian rival.

"Matteo was an extremely difficult opponent, because I had not faced anyone who serves at 235 km/h, who dominates the ball like him.

"Against Rafa (Nadal) and Dominic (Thiem), the matches were different, although they are obviously excellent clay players, perhaps the two best at the moment.

"Against Matteo, it was extremely difficult to just put the ball back in the court."

Zverev is targeting a second Rome title at the Foro Italico next week.

He captured his first Masters there in 2017 before also winning in Montreal later that year.

"Rome is also an event I like and enjoy, so I hope I can perform in the same way as I did here and we will see how it goes there. I feel awesome," said Zverev.

After Rome, the German star will target a maiden Grand Slam title at Roland Garros. However, he has yet to get beyond the quarter-finals in Paris.

"To play well at Roland Garros, you have to play well during the season on clay. In that sense, it's (Sunday's win) important to me," said Zverev.

"I think we had a great fight. It's tough, this sport is crazy. It's a really good moment of my career but at the same time it's not that great because I lost," said Berrettini.

World number 10 Berrettini landed the first blow as he broke Zverev to move 4-3 ahead in the opening set at the Caja Magica, only to drop his service the very next game.

The Italian raced into a 5-0 lead in the tie-break but Zverev clawed it back to 5-4 before two set points slipped beyond the grasp of Berrettini.

Zverev failed to take a set point of his own at 7-6 and then saved a third, but a double fault at 8-8 handed Berrettini another opportunity that this time he did not let go to waste.

It was the first set lost by Zverev, whose last clay-court title had come in Geneva in 2019.

Zverev secured the only break of the second set in game nine, when Berrettini double faulted, to send the match into a decider.

The German then broke to move 3-2 ahead in the final set and closed out victory after two hours and 40 minutes with another break, earning his second title of the season after taking home the Acapulco crown in March.

Comments
Topics mentioned in this article
Alexander Zverev Tennis
Get the latest updates on ICC T20 Worldcup 2022 and CWG 2022 check out the Schedule, Live Score and Medals Tally. Like us on Facebook or follow us on Twitter for more sports updates. You can also download the NDTV Cricket app for Android or iOS.