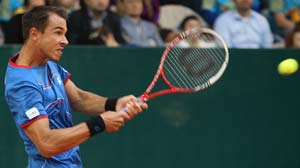 Lukas Rosol of Czech Republic put the defending champions into the Davis Cup semi-finals with a tough win over Kazakhstan's Evgeny Korolev at Astana on Sunday.

"It was a really difficult win as Evgeny showed really classy tennis today and kept me under pressure throughout the match," Rosol said.

"Luckily I managed to resist the pressure and won. It's our joint win, the entire team's result."

In the second set Korolev, who is 187th in the world, broke in the sixth game but Rosol broke back in the ninth to set up another tiebreak, which Korolev won to level at one set all.

The third set was almost a carbon copy of the second as Korolev grabbed the lead in the fifth game, while Rosol levelled in the 10th. But this time the 27-year-old Czech was more precise in the tiebreak to clinch a 2-1 lead.

In the fourth Rosol underlined his clay supremacy, breaking his rival's serve twice to win the set, the match and a place in the semi-finals for his team.

On Saturday Kazakhstan's pair of Golubev and Yuriy Schukin reduced the arrears with a straight-set win 7-6, 6-4, 6-3 over the Czech pair Hajek and Radek Stepanek.

Comments
Topics mentioned in this article
Tennis Evgeny Korolev Lukas Rosol
Get the latest updates on IPL 2020, check out the IPL Schedule for 2020 and Indian Premier League (IPL) Cricket live score . Like us on Facebook or follow us on Twitter for more sports updates. You can also download the NDTV Cricket app for Android or iOS.