Lleyton Hewitt won two Grand Slams at Wimbledon and Flushing Meadows, and remains the youngest player to reach world number one at 20 years and eight months.

Written by Agence-France Presse
Read Time : 3-min
Lleyton Hewitt of Australia gestures during his second round match against David Ferrer of Spain at the Australian Open in Melbourne. © AP

Lleyton Hewitt was once scorned as just another tennis superbrat but he exited the sport on Thursday admired as an elder statesman with Australian newspaper headlines declaring, "We Love Lleyton." (Australian Open: Lleyton Hewitt's Singles Career Comes to an End After Loss to David Ferrer)

The ultra-competitive Aussie battler went down in a typically fighting display against David Ferrer in the Australian Open's second round, in which he was warned for swearing and clashed with the umpire.

It seemed a fitting send-off for a player who squeezed every ounce of effort out of his injury-ravaged body for individual honours and country.

But the 34-year-old warhorse didn't always enjoy the love of his fellow countrymen. In his early years on the circuit, the national emotions were the polar opposite for Hewitt and his trademark "C'mon!" war cry.

While Hewitt won two Grand Slams at Wimbledon and Flushing Meadows, and remains the youngest player to reach world number one (at 20 years and eight months), he was also making headlines for the wrong reasons.

One of the worst incidents was at the 2001 US Open when, while playing African-American James Blake he demanded the removal of a black linesman from the court.

Hewitt, who had just been called by the linesman for a foot-fault, yelled at the umpire: "Change him, change. I'm only getting foot-faulted at one end.

"Look at him, mate, and tell me what the similarity is. I want him off the court."

It created a huge storm and afterwards Hewitt denied that he was a racist.

Hewitt also had a running battle with Argentine players and at the 2005 Australian Open, Juan Ignacio Chela spat in his direction during their testy third-round match.

Chela had apparently been aggrieved by Hewitt's cry of "C'mon!" after the Argentine missed an easy volley. 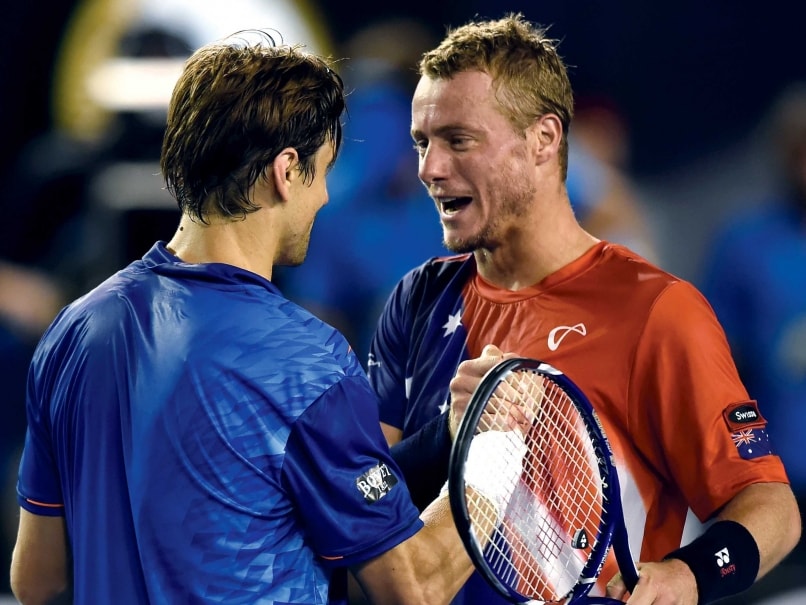 David Ferrer (left) of Spain is congratulated by Lleyton Hewitt of Australia after winning their second round match at the Australian Open in Melbourne.

Relations became so strained that Hewitt employed two personal bodyguards when he played a Davis Cup tie in Buenos Aires in 2006, prompting Argentine player Jose Acasuso to say: "Hewitt seems to think that he's come to Iraq, that they are going to plant a bomb."

Hewitt also disdained the media spotlight and received plenty of bad press, with some pundits even declaring him one of the most hated players in tennis.

Fast-forward to the present day and the married, matured father-of-three has become Australia's new Davis Cup captain and charged with mentoring the new bad boys on the block, Nick Kyrgios and Bernard Tomic.

And just like with Hewitt, the pair are under the scrutiny and pressure of a love-hate relationship with the Australian public and media -- and are they are now being urged to copy some of his fighting spirit.

"One thing you always try and tell the up-and-coming kids is to lay yourself open, and Lleyton is a classic example of somebody who has given it everything to be the best possible player," said former world number one Pat Rafter.

Despite all his early controversies, Hewitt is forgiven and rightly revered for his Davis Cup exploits. He twice played in a winning team and was a runner-up twice.

He played in a record 41 ties for his country, with a 58/20 win-loss record in singles and doubles.

Neither can anyone quibble about Hewitt's renowned tenacity, which came to the fore when he took a risky decision to have radical foot surgery back in February 2012.

Seven surgeons told Hewitt his career was finished if he had the operation on his troublesome big toe, which was arthritic and misshapen after years of digging into hard courts to launch his service action.

But the operation, which required bone being cut from the big toe of his left foot and two screws and a metal plate permanently locked in, gave him a further four years on the tour.

Given his successes and legacy for Australian tennis, there won't be too many people begrudging the accolades handed out as he exited Rod Laver Arena for the last time.

Losing Has Never Been More Lucrative At The Australian Open