Hewitt, who stood number one in the world more than a decade ago, rolled back the clock with his comprehensive win in 66 minutes. 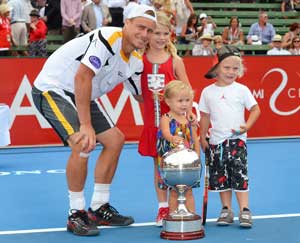 Lleyton Hewitt showed vintage form as he humbled Juan Martin Del Potro 6-1, 6-4 on Saturday to win the Kooyong Classic, just days ahead of the start of the Australian Open.

Hewitt, who stood number one in the world more than a decade ago, rolled back the clock with his comprehensive win in 66 minutes, duplicating his Kooyong title from 2011 at the eight-man special event.

The 31-year-old dominated for most of the contest under cloudy skies and in windy conditions at the Kooyong Stadium -- the former home of the Open.

The unseeded veteran who holds Wimbledon and US Open titles, will be a danger-man in the Grand Slam draw at Melbourne Park when play begins on Monday.

"Juan Martin is a fantastic competitor," said Hewitt, who called the Argentine "one of my best mates on the tour. We always train together.

"He's one of the best and I'm sure it won't be long before he's pushing at the top three or four in the world."

Hewitt also paid homage to the club: "This is the home of Australian tennis, there have been so many great Davis Cup ties played here."

Hewitt raced through the opening set in 27 minutes, reaching a 3-1 lead after just 16 minutes. The Australian finished off the set on a first set point as Del Potro fired a forehand long.

Del Potro made a stab at a rally in the second set, breaking Hewitt for 3-4 at one point and levelling at 4-all soon after.

But Hewitt stayed in control, moving to 5-4 and finishing a game later on a second match point, a stinging forehand return winner.

Tomas Berdych lifted his game to claim third place through a 6-3, 6-2 win over Marcos Baghdatis, winning in just under an hour.

The performance was a vast improvement for the sixth-ranked Czech after losing in straight sets to Hewitt earlier in the week.

Berdych had complained of not feeling his game on court, but had solved his problem by Saturday's match.

"It's good to get in a match before Monday, everything in your game is important at this point," said the Czech. "I've rediscovered by game again, I think I found it today."

Berdych needed four match points to finally put away 2006 Melbourne Park finalist Baghdatis, with the Cypriot driving a ball into the net to end the contest.

Berdych begins his Australian Open campaign against American Michael Russell, who he last played in 2010.

"He's a very tough guy who gives everything on the court. He's a good fighter and doesn't give you any points for free. I must be focussed on every point, he's a good challenge to start with in the first round."

Comments
Topics mentioned in this article
Tennis Lleyton Hewitt Juan Martin del Potro
Get the latest updates on ICC T20 Worldcup 2022 and CWG 2022 check out the Schedule, Live Score and Medals Tally. Like us on Facebook or follow us on Twitter for more sports updates. You can also download the NDTV Cricket app for Android or iOS.