Feliciano Lopez defeated Ramkumar Ramanathan 6-4, 6-4, 3-6, 6-1 in the first match of the day. David Ferrer then thrashed Saketh Myneni in straight sets 6-1, 6-2, 6-1 to give Spain 2-0 lead over India in World Group play-off. Get all the highlights of India vs Spain here

21:36 hrs IST: And it's over. Ferrer defeats Myneni in straight sets to give Spain 2-0 lead over India.Â

21:05 hrs IST: Brilliant forehand from Ferrer and he wins the second set 6-2.Â 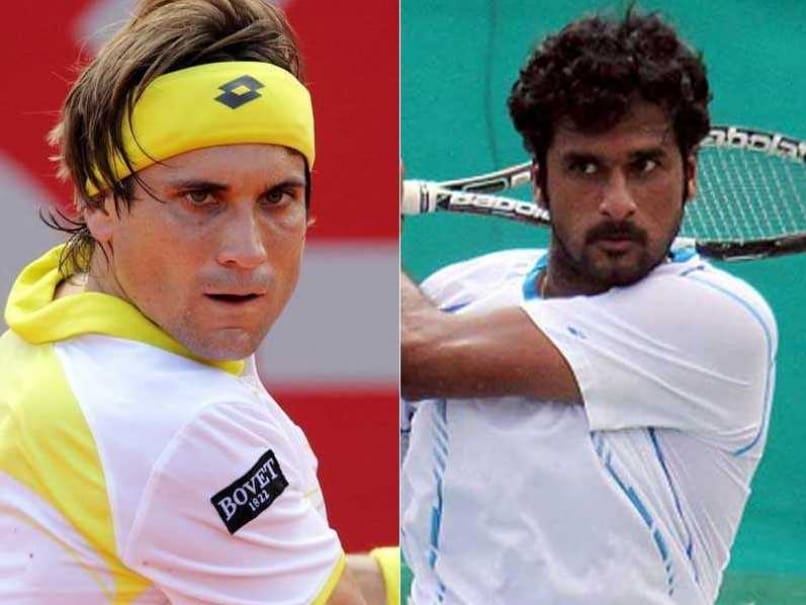 Saketh Myneni will take on David Ferrer in second match of the day.Â

19:58 hrs IST: So David Ferrer has won the toss and he'll serve first.Â

19:32 hrs IST: Sharp ace from Ramanathan and it's deuce.Â

19:04 hrs IST: And he is on fire! Ramanathan breaks Lopez for the first time in the match. Leads 5-3. He'll serve for the set.Â

18:58 hrs IST: Ramanathan with a forehand winner and he now leads the third set 4-3.Â

18:54 hrs IST:Â The Indian has failed to win crucial moments and that has indeed made the difference.Â

18:47 hrs IST: Ramanathan is receiving some treatment in his right knee. He leads 3-2 in third set.Â

18:05 hrs IST: Clever drop shot by Lopez and Ramanathan is not able to pick it. Lopez leads 3-1 in second set.Â

17:52 hrs IST: And Lopez wins the first set 6-4. Ramanathan needs to make his way back in the match as soon as possible.Â

17:47 hrs IST: Ramanathan fighting hard for every point but still 4-5 down. Lopez's experience coming into play.Â

17:38 hrs IST: Consecutive double faults from Ramanathan. Lopez gets another chance to break.Â

17:32 hrs IST: An excellent forehand from Lopez and he breaks Ramanathan for first time in the match. Leads 3-2.Â

17:21 hrs IST: Ramanathan goes 2-1 up in no time. Brilliant display of strong backhand shots from him.Â

17:01 hrs IST: Live action is about to start. Both players are warming up.Â

16:56 hrs IST: Lopez will now play against Ramanathan in the first match. However, if Nadal recovers in time, he could play the reverse singles against Saketh Myneni on Sunday.Â Ramkumar Ramanathan will face a stiff challenge from Feliciano Lopez in the opening rubber of Davis Cup World Group playoff.Â

Not that this will hand India a massive advantage. Although Feliciano Lopez is a doubles specialist and the current French Open champion, world No. 203 Ramanathan will start as the underdog.

Nadal's absence will take the gloss off the first day's proceedings. He could be seen in action on Day 3 only if the reverse singles are required to be played. The second match today will be played between India's best singles player Saketh Myneni and David Ferrer.

Thirty-four-year-old Lopez has a singles ranking of 26. He won the Swiss Open title in Gstaad in July, 10 years on from a runner-up finish to Richard Gasquet.

Twenty-one-year-old Ramanathan has a 4-6 win-loss record in the ATP circuit. It remains to be seen if he can take Lopez the full distance of a five-setter.

Comments
Topics mentioned in this article
Feliciano Lopez Ramkumar Ramanathan Rafael Nadal Live Blogs Live Score Tennis David Ferrer Saketh Myneni
Get the latest updates on India vs Australia Series, check out the India vs Australia Schedule for 2020-21 and Ind vs Aus live score . Like us on Facebook or follow us on Twitter for more sports updates. You can also download the NDTV Cricket app for Android or iOS.