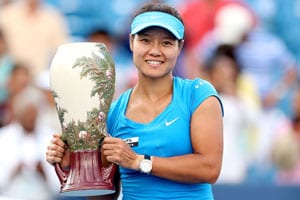 The 30-year-old Li rallied from a crushing first-set loss with some superb serving as she won 80 percent of her first-serve points in a dominating third set.

This was her first tournament under new coach Carlos Rodriguez, who only came on board mid-week.

Li ended her fight-back victory with six breaks of Kerber's serve from 21 chances, with the fatigued Kerber starting to feel the effects of a leg injury.

The Chinese player said she was inspired by Roger Federer's win earlier in the men's final.

"I wanted to do the same," she said. "I was feeling OK on court. I wanted to win this title because this year, I got in the final three times but I never won one title. I was really hungry for the title."

Li also paid tribute to her new mentor in her victory speech: "Carlos you are the best." She needed 100 minutes to oust Kerber and her victory means she will maintain her current ninth world ranking.

Kerber "was playing unbelievable in the first set. I was trying to play flat, play fast, but she had no mistakes," Li said. "I just continued to try, and finally, it worked."

The Chinese number one was playing her second final in as many weeks after losing a title bid in Montreal to Petra Kvitova.

"It's amazing this year." said Li. "It was great to be in the final and finally win after such a long time.

"I was able to recover after a very bad first set and find my game. I hope this is how it's gonna be with Carlos now."

Kerber is now 2-2 in 2012 finals after winning the Paris Indoors and in Copenhagen and losing after holding championship points at Eastbourne in June.

The German player now heads to Dallas for another US Open tune-up event. "I'm very happy that I was in the final, but today she was better than me," Kerber said.

Comments
Topics mentioned in this article
Tennis Na Li David Nalbandian Roger Federer Andy Murray Juan Martin del Potro Andy Roddick Serena Williams Angelique Kerber
Get the latest updates on ICC T20 Worldcup 2022 and CWG 2022 check out the Schedule, Live Score and Medals Tally. Like us on Facebook or follow us on Twitter for more sports updates. You can also download the NDTV Cricket app for Android or iOS.