Bopanna and his French partner defeated American pair of John Isner and Nicholas Monroe 7-6(2) 7-5 after one hour and 13 minutes. 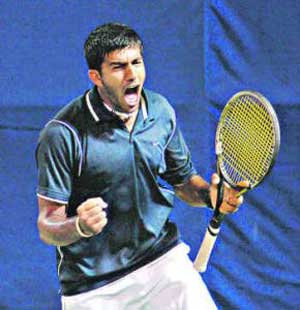 Fifth seeds Rohan Bopanna and Edouard Roger-Vasselin booked a quarter-final berth in the ATP Paris Masters but Leander Paes and Daniel Nestor were ousted after a straight sets defeat, here.

Bopanna and his French partner defeated American pair of John Isner and Nicholas Monroe 7-6(2) 7-5 after one hour and 13 minutes.

There was no break of serve in the opening set as the Americans saved all four break chances while Indo-French team saved the only chance they faced and then prevailed in the tie breaker.

In the second set too, Bopanna and Roger Vasselin created a lot of opportunities. The Americans saved four chances but could not stop Indo-French team from converting another and that sealed their fate.

In the other second round match, seventh seeds Leander Paes and Daniel Nestor lost 4-6 3-6 to Mexico's Santiago Gonzalez and American Scott Lipsky in just 55 minutes.