Russia's Maria Kirilenko weathered a tenacious performance from Yaroslava Shvedova of Kazakhstan to reach the quarter-finals of the Kremlin Cup tennis here Thursday. 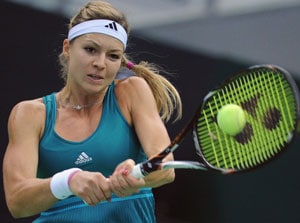 Russia's Maria Kirilenko weathered a tenacious performance from Yaroslava Shvedova of Kazakhstan to reach the quarter-finals of the Kremlin Cup tennis here Thursday.

Kirilenko won both sets by breaking Shvedova's serve and took match 7-5, 6-4, after nerves appeared to play their part in delivering eight breaks in the 22 games.

The match pitted together two Moscow natives, with Kirilenko officially representing Russia, while Shvedova switched to represent Kazakhstan in 2008.

Kirilenko came back from a break down in the first set to level at 5-5 before breaking Shvedova to seal the set.

Ivanovic beat world No.216 Solovieva 6-1, 6-4 in the second round for her first win in two appearances at the Moscow tournament.

"I think she started to play better in the second set and she was missing less," Ivanovic said, adding that she thought Solovieva was overawed by the occasion in the first set.

"I think it was the nerves because I think she was playing in her first big match."

The Serbian fourth seed will now play qualifier Vesna Dolonc in an all-Serbian quarter-final after Dolonc demolished Romania's Simona Halep 6-1, 6-0 in the second round.