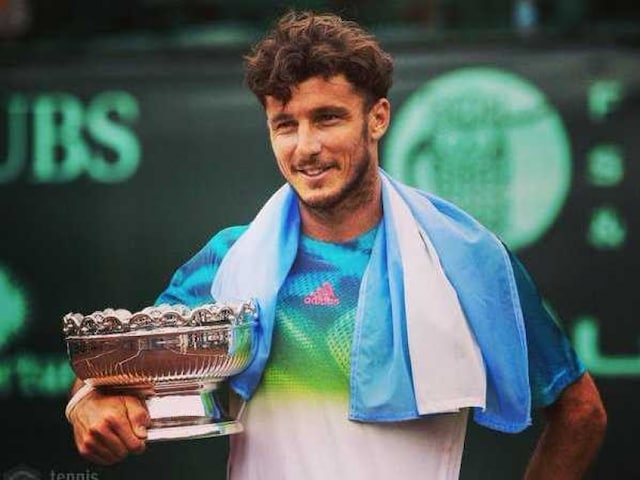 "I didn't expect this so fast," said Monaco, who had surgery on his right wrist in August and was sidelined for six months. "No words to describe this moment."

I'm very happy of having a cup in my hands once again and thankful of my quick return.... https://t.co/ggPPDdMWp0 pic.twitter.com/sVuEwUiFMG

The former top-10 is projected to rise from his 146th in the world to 90th, and said it was fitting that the first title of his return came in such a dramatic battle.

"Today was a quick movie of my life," said Monaco, 32, claiming his first ATP title since Duesseldorf in 2013 and his second in Houston to go with the one he earned in 2012.

After Sock took the first set, Monaco received treatment on his right arm, and after the injury timeout Sock lost 10 of the next 14 games.

Sock, the fourth seed, received treatment on his right arm and right shoulder, and was visibly limping in the third set -- when he still managed to erase two breaks of serve in the decider before Monaco finally finished him off.

"I'm not sure exactly what happened with my body," Sock said. "Last night I didn't feel great, was sweating even in a very air-conditioned room. So maybe coming down with something. But it doesn't take away from his battle and his fight today."

Comments
Topics mentioned in this article
Tennis Juan Monaco Jack Sock
Get the latest Cricket news, check out the India cricket schedule, Cricket live score . Like us on Facebook or follow us on Twitter for more sports updates. You can also download the NDTV Cricket app for Android or iOS.